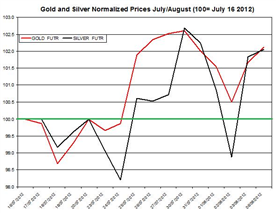 Precious metals continued to trade up for the second consecutive day; the recent rise in bullion prices coincided with the rally of other commodities rates and stock indexes. Bernanke didn't offer any insight as to the future steps of the FOMC in his recent speech. Today Bernanke will give another speech. Other items of today's agenda include: RBA's interest rate decision and GB's manufacturing production.

As seen, the chart presents the changes of normalized rates of precious metals in the last few weeks (normalized to 100 as of July 16th). As seen, during recent weeks gold and silver demonstrated an unclear trend.

RBA – Cash Rate Statement: the overnight money market interest rate of Australia's Reserve Bank remained unchanged at 3.5% - the lowest level since the end of 2009. If the RBA will decide to cut its rate again this news may affect the Aussie dollar that is strongly linked with bullion;

Great Britain Manufacturing Production: this report will show the yearly rate of GB's manufacturing production for June; in the last report regarding April the index rose by 1.2% (M-2-M);

The Euro/USD edged up on Monday by 0.11% to 1.2401. Further, other currencies including and CAD also appreciated on Monday against the USD by 0.11%. The linear relation between gold and the Euro remains robust: during the past month, the correlation between the gold and EURO/USD was 0.728 (daily percent changes). Thus, if the Euro will change direction and fall, it could also pull down precious metals.

Bullion rates rose for the second consecutive day but this rally might be at jeopardy if the Euro and other "risk currencies" will change direction and trade down against the USD. The upcoming rate decision of RBA could affect not only the Aussie dollar, but also precious metals rates. If the upcoming reports that will come out including Great Britain Manufacturing Production will show little growth, it could adversely affect the GB Pound which could also affect other currencies and commodities rates.