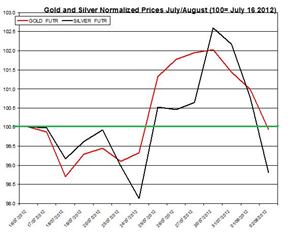 The prices of gold and silver fell for the third consecutive day. The lingering effect of the recent FOMC decision to keep policy unchanged and ECB's decision to leave interest rate unchanged may have contributed to the decline of not only the Euro, but also commodities prices such as gold and oil. U.S jobless claims rose by 8k to reach 365k. On today's agenda: U.S non-farm payroll report and ISM Non-Manufacturing PMI.

As seen, the chart below presents the normalized prices of precious metals in recent weeks (normalized to 100 as of July 16th). As you can see, despite the recent drop in bullion rates, they have both nearly haven't declined in the past few weeks.

FOMC's Decision Still Had a Lingering Effect on Bullion

Following the FOMC decision to keep policy unchanged, the recent decline in bullion rates may have also been affected by this decision. The table below shows the changes in bullion rates during the day of release of the statement and the following day.

U.S. Non-Farm Payroll Report: according the ADP the non-farm labor expanded by 163k. If the labor report will present a close figure, this could help rally the market. In June the number of non-farm payroll employment rose by only 80k; the U.S unemployment rate remained 8.2%; I suspect if the upcoming report will continue to show low growth of below 100 thousand (in additional jobs), this may raise the chances of the Fed introducing additional stimulus plan in 2012.

The Euro/ USD declined again on Thursday by 0.37% to 1.218. The non-action of ECB President in which he didn’t announce any change in the ECB Policy may have contributed to the fall of the Euro. The correlations between gold and the above-mentioned rates remain strong: during the month, the correlation between the gold and EURO/USD reached 0.71 (daily percent changes). Thus, if the Euro will change direction and rise, they may pull up precious metals rates.

The upcoming Labor report could affect the bullion market in the same direction as the stocks and commodities markets. If the report will be positive and increase by more than 120k this could positively affect the market. Finally, if the Euro and other "risk currencies" will change direction and rally, this could also pull up precious metals rates.