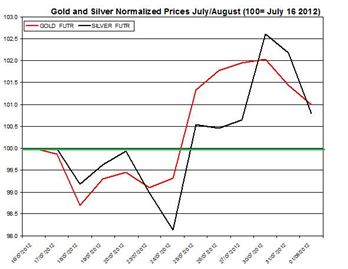 The prices of gold and silver declined for the second consecutive day after the FOMC didn't announce any additional monetary expansion plans. As I have pointed out, without another QE program, precious metals will likely to remain flat. The U.S manufacturing PMI edged up to 49.8 but is still showing contraction. According to ADP, U.S non-farm payroll rose by 163k in July. If tomorrow's non-farm payroll report will show similar results it could boost the stocks and commodities markets. On today's agenda: Great Britain Bank Rate decision, ECB Euro Rate Decision, U.S. Jobless Claims, and U.S Factory Orders.

As seen, the chart shows the normalized prices of precious metals in recent weeks (normalized to 100 as of July 16th).

As many had expected the FOMC left its policy unchanged. The recent testimonies of Bernanke at the Hill and the minutes of last month's FOMC meeting, have all pointed out that this the Fed won't make any big announcements in this statement. This news didn't help bullion rates and could continue to adversely affect precious metals in the days to come.

U.S. Jobless Claims: in the latest update the jobless claims fell by 35k to 353,000; this upcoming weekly report may affect the U.S dollar and consequently commodities;

The upcoming rate decisions of MPC and ECB could affect the forex markets if there will be a significant announcement. Finally, the upcoming American reports including jobless claims and factory orders could affect not only the forex markets but also bullion rates. If the Euro and other "risk currencies" will resume their downward trend, this could also drag down precious metals rates.

For further reading: On the Relation between QE Programs and Gold