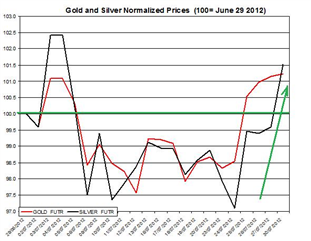 Gold started off the week the same way it has ended the previous one, edging up. Silver rose by a larger rate than gold did. Today, the FOMC will start a two day meeting; tomorrow the FOMC will publish a statement. The Euro changed direction and declined yesterday. The market still waits for the next step of ECB and will it bailout Spain, Italy and Greece. On today's agenda: U.S Consumer Confidence, China's Manufacturing PMI, Euro Area inflation rate, EU unemployment rate, Canada's GDP report, and German retail sales.

In the chart bellow are the normalized rates of these precious metals during the past several weeks (normalized to 100 as of June 29th). As you can see, during the month gold and silver didn't move much.

U.S Consumer Confidence: according to the previous report, the consumer confidence index fell in June (M-o-M). The current expectations are that the recent index may decline again;

Canada's GDP by Industry: In the previous report regarding April, the real GDP rose by 0.3%. This report may affect the strength of the Canadian currency which is strongly correlated with bullion rates;

The Euro/USD declined on Monday by 0.51% to 1.226. Alternatively, other currencies including AUD and CAD appreciated on Monday. The correlations between gold and the above-mentioned rates remain high: during the month, the correlation between the gold and EURO/USD reached 0.67 (daily percent changes); the relation between gold and AUD /USD, 0.53. Therefore, if the Euro and AUD will fall, they may also drag down precious metals.

Bullion started off the week rising but this rally might change direction if the Euro and other "risk currencies" will trade down. The FOMC meeting will conclude tomorrow and until then there might be renewed speculation of the future steps of the Fed which could keep pressuring bullion rates up. The volatility might continue to be low until after the FOMC meeting, the ECB and MPC rate decisions and the U.S labor report. The upcoming American and Chinese reports could affect not only the USD but also bullion. If the Chinese PMI index will decline, it could pressure down commodities.