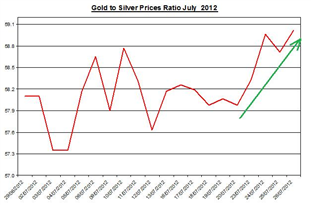 Gold price continued to rise for the third consecutive day; silver, on the other hand, edged down. The Euro hiked after ECB President tried to assure the markets by stating ECB is prepared to do whatever it takes to preserve the Euro. This might include bailing out Spain and Italy. This news may have also helped rally commodities rates via the deprecation of the USD. Several U.S reports were published: U.S pending home sales slipped in June. This news may have also adversely affected USD. On today's agenda: flash U.S. GDP growth rate estimate for Q2 2012, KOF Economic Barometer.

The ratio between the two precious metals edged up on Thursday to 59.02. During July the ratio rose by 1.58% as gold slightly out-performed silver.

U.S GDP 2Q 2012: In the previous estimate, the U.S GDP Q1 expanded by 1.9%. This shows a decrease in the growth rate for the US's GDP. If there will be a sharp shift in the growth rate from Q1 to Q2 this could affect not only the US dollar but also commodities prices. This could also influence FOMC members in anticipation for next week's FOMC meeting.

The Euro/USD hiked again on Thursday by 1.03% to 1.2283. Further, other currencies including Australian dollar and Canadian dollar also appreciated on Thursday against the USD by 0.86% and 0.53%, respectively. The correlations between gold and the above-mentioned exchange rates remain strong: during July the correlation between the gold and EURO/USD reached 0.71 (daily percent changes). Thus, if the Euro and AUD will continue to trade up against the USD, they may also pull up precious metals rates.

Gold continued to trade up during yesterday's trading while silver ended up slightly down. This recovery might have been mostly due to the rally of the Euro and negative growth rates in some of the US reports. The rally in the Euro over ECB President's Statements might dissipate today until ECB will act on its promises. If the upcoming US GDP report will show a much different growth rate than in Q1, this could affect the forex and commodities markets. A decline in growth rate could make it a bit easier for Bernanke to pass QE3 in next week's FOMC meeting. If the GDP will be well below the 2% growth rate, it could adversely affect the USD and commodities.