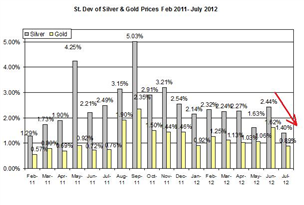 During yesterday's trading precious metals prices didn't do much as silver slipped and gold edged up. According the yesterday's flash manufacturing PMI reports the Euro Zone and Germany continued to contract during July. Canada's retail sales edged up by 0.3% during May. Australia's CPI rose by 1.2% during Q2 2012 (annual terms). These reports may have affected these countries' respective currencies. The EU related reports may have contributed to the weak Euro, which, in turn adversely affected bullion rates. If the USD will keep appreciating it could raise the chances of the FOMC intervening in the market and issuing QE3 just to weaken the USD. On today's agenda: U.S. New Home Sales, German 30 Year Bond Auction, Flash GB GDP Q2 2012 (Update: The GB GDP contracted by 0.7% in Q2 2012. This news may help rally the Euro and weaken the GBP) , German Business Climate Survey.

The ratio between the two precious metals rose again on Tuesday to 58.96. During July the ratio rose by 1.49% as gold slightly performed silver.

The slow movement of both bullion rates is represented in the decline in precious metals prices' volatility during the month: the standard deviations of gold and silver (daily percent changes) reached 0.89% and 1.4%, respectively.

U.S. New Home Sales: in the recent report, the sales of new homes rose by 7.6% to reach an annual rate of 369,000; if the number of home sales will continue to rally, it may further indicate a sign of recovery in the U.S real estate market which may also affect the strength of the US dollar.

German Business Climate Survey: This survey will refer to Germany's business climate. In the recent report for July 2012, the business climate index declined from 106.9 in May to 105.3 in June; if this trend will continue, it might further pull down the Euro;

The Euro/USD fell on Tuesday by 0.46% to 1.2061. The correlations between gold and the above-mentioned currencies pairs remain robust: during July the correlation between the gold and EURO/USD reached 0.66 (daily percent changes). Therefore, if the Euro and AUD will change direction and rally, they may also pull up precious metals rates.

The slow paced movement of precious metals may continue during the week. The ongoing appreciation of the USD against the Euro Aussie dollar and CHF is also keeping gold and silver from rising. If this direction will change and the Euro will rally, it could also pull up bullion rates. The upcoming reports regarding U.S GB and Germany could affect their respective currencies which in turn may affect precious metals. There may be some shifts in the general market direction but I still guess that during the week general direction of bullion rates will be downward during the week.

For further reading: How will a Greek Exit Affect Gold and Silver?