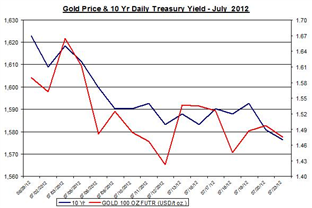 Flash Euro Area Manufacturing PMI: This report will provide an indicator to the economic progress of the Euro zone's manufacturing conditions; this news, in turn may affect the Euro/USD and consequently also bullion;

Flash U.S. Manufacturing PMI: During June the ISM index declined to 49.7%, which means the manufacturing is contracting; this index might affect commodities markets;

The U.S. 10-year Treasury yield continues to decline and reached 1.47% on Monday. The fall in LT securities yields may indicate the demand for "secure investments" continues to rise. During July there was a high and positive correlation between U.S. long term Treasury yield and bullion: the linear correlation between 10 year yields (percent change) and gold price reached 0.716. If the LT U.S. treasury yield will continue to drop, it might indicate that metals rates will also follow and decrease.

The weak Euro is pulling down not only commodities prices but also other currencies such as Aussie dollar and CHF. If the Euro will continue at this direction it could adversely affect bullion. The ongoing fall in the U.S LT yields suggests traders are becoming more "risk averse". This could also suggest bullion rates will suffer from this market sentiment. The upcoming reports regarding U.S Canada and EU could affect their respective currencies which in turn may affect precious metals rates. I still think the general direction of bullion rates will be downward unless there will be some breaking news.