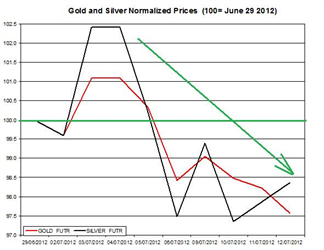 Bullion rates, much like many other commodities, didn't do much yesterday as both metals moved in different direction for the second consecutive day. China's GDP growth rate report for Q2 2012 came out and didn't even meet expectations: China expanded by only 7.6 in annual terms during Q2. During Q1 China's GDP grew by 8.1%. This low growth rate may adversely affect not only commodities rates but also exchange rates such as Aussie dollar. On today's agenda including: U.S core PPI and UoM Consumer Sentiment.

The chart bellow shows the normalized rates of these precious metals during July (normalized to 100 as of June 29th).

U.S. Core PPI: In the previous report regarding May this index for finished goods fell by 1% compared with April's rate and rose by 0.7% in the last 12 months; this news might affect bullion;

UoM Consumer Sentiment (preliminary): University of Michigan will issue its preliminary consumer sentiment survey; this report could offer another perceptive to recent changes in U.S consumers sentiment about the economy; last time the sentiment index fell to 74.1;

The Euro/USD fell on Thursday by 0.29% to 1.2203. Further, other exchange rates such as the AUD also depreciated on Thursday. The linear correlation between gold and Euro/USD is 0.65 (daily percent changes, for June/July). If the Euro/USD and AUD/USD will continue to decrease, it could pull down precious metals rates.

The results of China's GDP report might adversely affect the commodities markets during the day. On the other hand, the disappointing growth raised the speculation that China might introduce a stimulus plan to jumpstart its economy. The U.S core PPI could affect bullion rates as indicated above. Finally, if the Euro and other risk currencies such as AUD/USD will continue to fall, then they are likely to also drag down bullion.