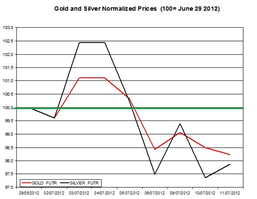 Gold declined again for the second consecutive day. Silver, on the other hand edged up. The recent minutes of the June FOMC meeting didn't provide any hints of possible implementations of QE program in the near future. Several FOMC members also voiced their concerns over the effects the stimulus plans will have on the long term inflation pressures. American Trade Balance was published yesterday and showed a mixed signal: there was a decline of $1.9 billion in the deficit during May compared to April; the deficit reached in May $48.7 billion; the decline was due to a rise in exports and a fall in imports. There are many items on today's agenda including: China Second Quarter GDP 2012, ECB Monthly Bulletin, U.S. Jobless Claims, Great Britain 10 Year Bond Auction, and ECB President Draghi will give a speech.

The chart below presents the normalized rates of these precious metals during July (normalized to 100 as of June 29th).

Despite the different directions gold and silver took yesterday, the linear correlation of the two precious metals is still strong and robust, as indicated in the chart herein. During July the linear correlation of their daily percent changes reached the highest level in 2012 so far, which means the two metals' relation has tighten in recent weeks.

China Second Quarter GDP 2012: the current expectations are that the Q2 2012 grew in annul terms by only 7.5%; if the growth rate will be lower than in the previous quarter it might adversely affect commodities prices;

U.S. Jobless Claims: in the latest report the jobless claims declined by 14k to 374,000; this upcoming weekly report may affect the U.S dollar and consequently bullion rates;

The minutes of the FOMC meeting didn't provide any hints for a possibility of QE3 in the near future. Therefore precious metals might further decline during the remainder of the week.

The upcoming GDP report of China could affect the commodities markets; if the report will show a lower growth rate in Q2 than in Q1, this could pull down major commodities rates. The U.S jobless claims could affect the forex markets which in turn could also affect precious metals. Finally, if the Euro and other risk currencies will continue to decrease, then they are likely to also pull down bullion.

For further reading:Gold and Silver Monthly Outlook for July