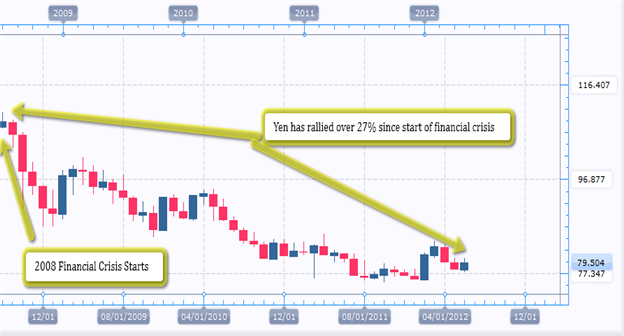 Guess Commentary: Get Ready for a Massive Reversal in the Yen

Proclamations of doom and gloom over the Japanese economy, and corresponding calls to short the Yen, have become somewhat commonplace over the past few years. Leading the movement to short Japan is KyleBass, the hedge fund manager who made a name for himself in successfully forecasting and trading the global housing bubble. These days he is the chief evangelist of the short Yen movement, going so far as to have the mortgage for his home in the United States denominated in Yen.

Thus far who those who have been short the Yen on a long-term basis have failed miserably. Consider the chart below, which shows the performance of USDJPY since the 2008 financial crisis. The Yen has rallied 27% percent relative to the US dollar.

But for trend traders, there are three rules: (1) accept periodic losses as a cost of doing business; (2) keep your losses small; and (3) make sure you get in on the big trends. And so, from the perspective of the trend trader who has been careful to keep losses small when shorting the Yen, there is no cause for concern: if anything, the rally in the yen is only setting up a much larger collapse, and so the potential payday for shorts is conceivably even better than it looked before. To fully understand this, let's consider the reasons why shorting the Yen remains such an appealing opportunity:

1. Twin deficits. Japan is now running budget and trade deficits. In other words, its government is spending more than it takes in via taxes (a budget deficit), and the country is importing more than it is exporting (trade deficit). This is the same situation the United States has been in for over a decade, and we've seen what's happened to the US dollar in that time; it's been in a steady downtrend. Twin deficits decrease confidence in a currency, increase the likelihood of high levels of debt monetization (that the central bank will simply print money, likely devaluing the currency in doing so), and create a scenario where the currency is naturally sold more than it is bought in the course of international trade. Personally, twin deficits is one of the biggest signs I look for to find a currency worth shorting.

2. Huge debt levels. Much has been made of the debt crisis in the European Union and the United States, although the reigning champion in the game of which nation-state government can be most inept at balancing its budget is clearly Japan. Japan'sdebt/gdpratio is in excess of 2.2. What's this mean? It means there is basically no chance Japan can pay off the debt it has. There are only two options: a formally recognized default in which a large part of the debt is cancelled and the lender takes the hit or a whole lot of yen are printed to pay it off. I'm expecting the latter. Why? Because of.....

3. Japan's aggressive central bank. Japan's central bank remains very aggressive with theirinflationarytargets, as they have been for quite some time. They have repeatedly intervened in the foreign exchange markets over the past 20 years to ward off deflation, which I think illustrates their commitment to the art of devaluing their currency via inflating the money supply. They haven't succeed much -- the yen has still managed to rise in value during this time -- but now that Japan is running twin deficits and debt/GDP has grown to gargantuan levels, I don't know how much longer the Bank of Japan can engage in such inflationary monetary policy without unleashing serious currency devaluation. I think, finally, the consequences of such monetary policy are ready to manifest.

Technically, I think a case can be made that a base is forming, which in turn will set the stage for a powerful reversal. Below is a monthly chart of USDJPY; we can see similar developments on other Yen pairs. 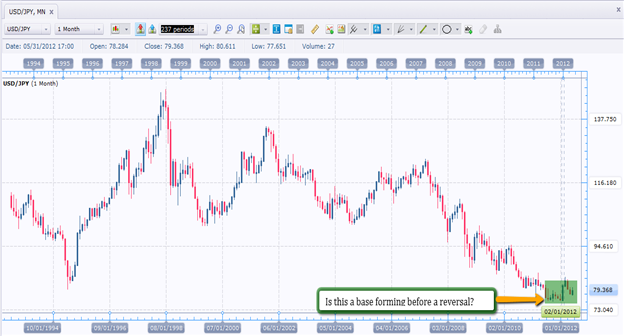 Shorting the yen favors the disciplined and patient trend trader. A few more rallies in the yen are conceivable, but for the reasons outlined in this article, when the reversal comes, it has the potential to be epic.

Simit Patel is a trader with 10+ years experience in the forex industry. He is the founder of InformedTrades, a community offering traders a free, comprehensive forextradingcourse.