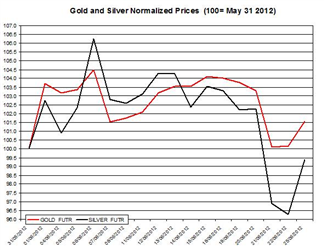 Gold and silver kicked off the week on a positive note as they have recovered some of the losses from last week but they are still at a low rate for the month. The rise in new home sales didn't seem to slowdown the rally of bullion nor did it curb the decline of U.S stock markets. The speculation around the upcoming EU Summit to be held on June 28 and 29 continues to run high. German Chancellor Merkel continues to reject the joint Euro bloc bond sales. The upcoming debt sales in Spain and Italy might raise concerns over the EU debt crisis. In the meantime, Moody’s downgraded 28 Spanish Banks' rating due in part to the country's sovereign debt crisis. Nonetheless, the fall of the Euro didn't seem to adversely affect precious metals. I suspect this sharp break in the relation between Euro/USD and bullion won't last long. On today's agenda: German Consumer Climate, Great Britain Net borrowing, Great Britain Inflation Hearings and U.S Consumer Confidence.

Gold hiked on Monday by 1.37% to $1,588.4; silver also rose by 3.23% to $27.59. The chart below presents the normalized rates of these precious metals during June (normalized to 100 as of May 31st). The chart shows how both metals declined during last week but bounced back yesterday.

U.S Consumer Confidence: according to the previous monthly update, the consumer confidence index declined in May (M-o-M). The current expectations are that the May index may decline; this report might affect commodities rates;

German Consumer Climate: Gfk group will publish their German consumer climate index. If this report will be positive it might also have a positive effect on the Euro;

The Euro/USD fell on Monday by 0.53% to 1.2504. Furthermore, other exchange rates including the AUD and CAD also depreciated on Monday against the USD. The decline of Euro and Aussie dollar didn't coincide with the rally of bullion rates on Monday. If the USD will continue to appreciate against these currencies, it may pull down bullion.

Precious Metals might have started off the week rising but I suspect this rally will be short lived. The ongoing concerns around the EU debt crisis and the appreciation of the USD are likely to pull down bullion rates. The upcoming US report could affect USD and commodities rates, especially if the report will show significant change. Finally the upcoming developments in Europe including the publications listed above and the debt sales of Italy and Spain are likely to affect not only the Euro/USD, but also other forex rates that are also linked with commodities markets.