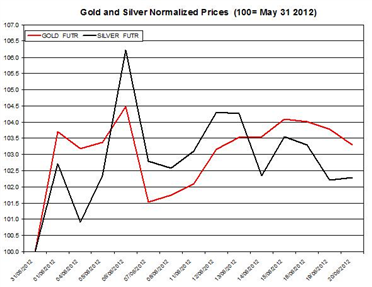 Gold continued to trade down, while silver edged up during yesterday. The FOMC announced it will extend its operation twist, in which the Fed extends the average maturity of its holdings of securities, throughout the rest of the year. This expansion is estimated at roughly $267 billion. On today's agenda: Euro Area Manufacturing PMI, British 10 Year Bond Auction, Canada's Retails Sales, U.S. Jobless Claims update, U.S. Existing Home Sales, Philly Fed Manufacturing Index and ECB President Draghi will give a speech.

The chart below shows the normalized rates of these precious metals during June (normalized to 100 as of May 31st).

The Fed announced it will continue its operation twist in which the Federal Reserve will extend the average maturity of its holdings of securities throughout the rest of 2012. This operation twist was first started back in September 2011 and was suppose to end in June 2012. On the other hand, as anticipated, the FOMC didn't introduce QE3.

Despite the expansion of the operation twist, it didn't seem to impress much the bullion traders as gold price continued to decline.

U.S. Jobless Claims: in the latest report the jobless claims rose by 6k to 386,000; this upcoming weekly update may affect the USD;

U.S. Existing Home Sales: in the previous report regarding April 2012 the number of homes sold rose: the seasonally adjusted annual rate of 4.62 million home sales – a 3.4% increase; if this trend will continue it may help rally the USD;

Philly Fed Manufacturing Index: This monthly survey presents an estimate for the shifts of the US economy as it measures the manufacturing conditions. In the previous May survey, the growth rate fell from +8.5 in April to -5.8 in May. If this trend will continue this index may adversely affect not only USD but also gold (the recent Philly Fed review);

The FOMC statement and the expansion of operation twist wasn't what many bullion traders had hoped for. I speculate this news is likely to continue adversely affecting precious metals prices in the days to follow. Further, despite the Fed's revised down projection of U.S economy the FOMC members didn't vote for another QE; another quantitative easing is likely to be the main factor that could pull up bullion. This could mean if the U.S economy won't shift towards a significant slowdown we won't see QE3.