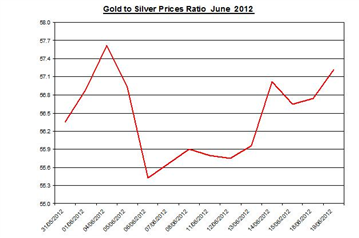 Gold and silver continue to dwindle as both metals edged down for the second consecutive day. Even the hike in Euro/USD and other related currencies such as the Aussie dollar didn't reverse the decline in precious metals prices. The rate of U.S housing starts decreased last month while the rate of building permits rose. This news also didn't seem to have much of an effect on the bullion market. After the hike in Spanish bond yields they have finally changed direction and started to come down. They are still high at 7.03%, after they had reached 7.29%. The FOMC meeting will end today and will conclude with a press conference and a statement about its updated monetary policy. On today's agenda: the minutes of the recent MPC meeting will come out, and China's manufacturing PMI flash report.

Statement of FOMC Meeting: Following a two day meeting, the FOMC will release a statement updating its monetary policy. I think the FOMC won't announce of another stimulus plan, especially after the recent testimony of given by Bernanke; if there will be a change in the FOMC's policy in the statement, then it may affect the USD and gold and silver; I speculate if there won't be another call for a stimulus plan or even a hint moving toward this direction in the near future, bullion rates are likely to decline;

The Euro/USD hiked on Tuesday by 0.86% to 1.2685. Furthermore, other exchange rates including the AUD and CAD Canadian dollar also appreciated during Tuesday. Despite the recovery of the Euro and Aussie dollar, both metals didn't seem to be affected from it as both metals were traded down. Nonetheless, if the U.S dollar will continue to depreciate against these currencies, it may curb the fall of bullion.

The upcoming FOMC statement and press conference could result in yet another storm in a teacup especially if the Fed won't budge from its current monetary policy. Since the prices of bullion have already tumbled down after the testimony of the Chairman of the Fed, then if the FOMC won't come up with big headlines, precious metals are likely to trade down (but I speculate not by much). Of course if the Fed will make an announcement or even hint it will consider anther stimulus plan this news could rally bullion rates. Finally the upcoming China's manufacturing PMI might also affect commodities markets if there will be a sharp shift in this index.