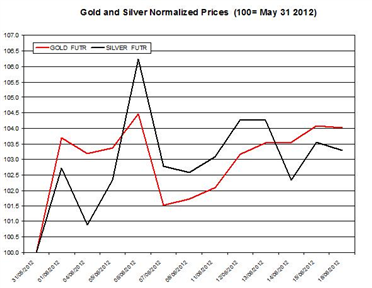 Gold and silver started off the week on a negative note as both precious metals rates edged down. The EURUSD also slipped. The results of the Greek elections, in which the pro bailout party had won, didn't seem to impress forex and commodities traders. All eyes in Europe continue to stare at Spain. In yesterday's G20 meeting the leaders talked about the EU debt crisis and Spain's soaring borrowing costs: Spain's bond yields rose to 7.29. The G20 meeting will continue today. The FOMC meeting starts today and will conclude tomorrow with a press conference and statement. On today's agenda: Euro Area and German ZEW economic sentiment, U.S. Housing Starts and Japanese Trade balance.

The chart below presents the normalized rates of these precious metals during June (normalized to 100 as of May 31st).

U.S. Housing Starts: this report was historically correlated with gold– as housing starts rose, gold tended to fall the following day (even when controlling to the USD effect); in the previous report, the adjusted annual rate reached 717,000 in April 2012, which was 2.6% above March's rate;

Euro Area ZEW economic sentiment: For May 2012 the ZEW indicator for Euro Area fell to -2.4;

Japan's trade balance: The Japanese trade balance deficit for April 2012 fell by 22.1% compared with March 2012, to reach 480.1 billion YEN (roughly $6.07 billion) deficit (seasonally adjusted figures). This decrease is due to the decrease in imports by 1.7%, and the growth in exports by 0.5%;

The EURUSD slipped on Monday by 0.48% to 1.2577. On the other hand, other exchange rates including the AUD slightly appreciated during Monday against the USD by 0.49%. If the USD will depreciate against these currencies, it may pressure up bullion.

I suspect metals are likely to trade up today especially if the upcoming U.S reports including U.S housing starts will be negative. The G20 meeting continues to produce big headlines, but eventually I don't think the result of the G20 meeting will mount up to a resolution. The ongoing concerns over the Spanish debt crisis are likely to keep the Euro weak and thus may adversely affect bullion rates. Finally, the speculation around the resolution of the FOMC meeting could keep bullion rate edging up during the day.