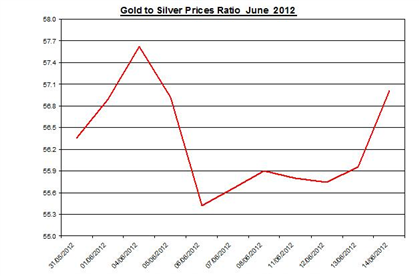 Gold and silver continue to dwindle yesterday as gold price edged down while silver price fell again. The announcement of CME to lower the margins on gold by 10% (effective as of May 29th) may help gold price to pick up. The U.S CPI fell by 0.3% mainly due to the decline in energy prices. The core CPI edged by 0.2%; U.S jobless claims rose to 386k. On today's agenda: U.S. TIC Long Term Purchases, UoM Consumer Sentiment and ECB President Draghi will give a speech.

The ratio between the two metals sharply increased on Thursday to 57.01.

Yesterday, June 14th, the U.S. jobless claims weekly update was published for the week ending on June 9th; according to the report, the number of initial claims rose by 6k to 386,000 claims (seasonally adjusted data), which is higher than the revised figure of 380k claims from last week.

ECB President Draghi Speaks: Following the ECB rate decision in which the rate remained flat at 1% the President of the European Central Bank, Mario Draghi will speak; his speech may include the recent events in Europe including the recent bailout Spain requires from the EU for its major banks;

U.S. TIC Long Term Purchases: The Treasury InternationalCapital report will present the changes in the purchases and sales of US long term treasuries in April 2012. In the previous report regarding March 2012, the net foreign sales of U.S Treasuries longer-term notes reached $36.2 billion;

The Euro/USD increased on Thursday by 0.61% to 1.2633. Furthermore, other exchange rates such as the AUD and CAD also appreciated during Thursday. If the USD will continue to depreciate against these currencies, it may help rally bullion.

Bullion slightly rose on a weekly scale, but not by a large margin. This trend may continue today. If the Euro/USD will trade up it could help bullion rates.

The upcoming U.S reports including TIC long term purchases, and consumer confidence might affect the US dollar and consequently gold and silver. If ECB president will refer to the recent developments in EU and address to ECB's policy it could stir up the markets. The upcoming elections in Greece over the weekend will likely to raise the speculation about the future of Greece in the EU.