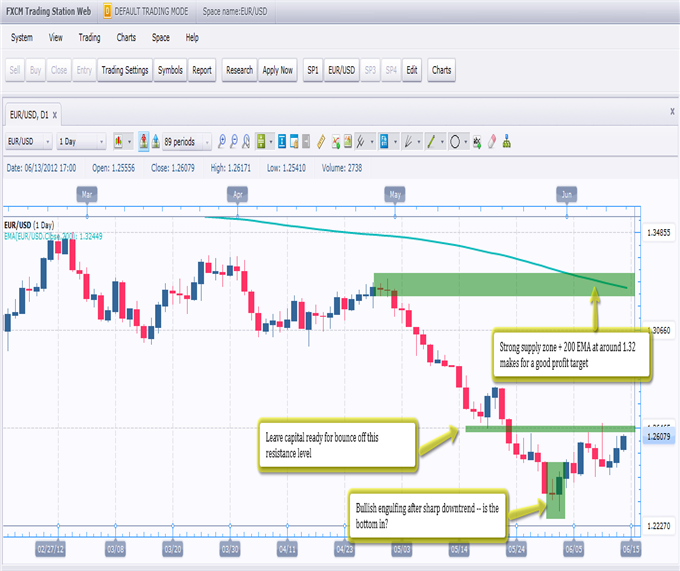 Guest Commentary: How the Euro-Zone Debt Crisis Gets Resolved

I should begin by stating that I’m not focused on trading the Euro/US dollar exchange rate at this time; from my perspective, their both doomed currencies worth shorting, and so I’m not comfortable taking the long side on either of them. At the moment I favor shorting the US dollar against the Canadian dollar, a trade I’ll discuss in greater detail in future articles.

But because of how significant the Euro and US dollar are to the global economy and how EUR/USD is the most actively traded currency pair, it is worth observing and commenting on. Undoubtedly, the biggest factor affecting the value of the Euro is what countries, if any, will leave the Eurozone. Personally, I find it very unlikely that any country will leave; rather I suspect the sovereign debt crisis will result in the Eurozone growing stronger, and becoming a more fiscally united union. We are already seeing progress in this direction; the social Democrats in Germany recently proposed the European Redemption Pact, which would give the European Union, under the leadership of Germany, the ability to issue its own bonds. Under the plan, member countries would transfer any debt that is beyond 60% of their GDP to a fund that is to be managed by Germany. Member countries would be required to pledge 20% of their debt that is taken on and re-sold via Eurobonds as collateral. It is crucial to note that gold would be seen as an accepted form of collateral, which in turn means that the proposed Eurobond would be gold-backed in a way -- and that indebted countries paying into the European Redemption Pact would benefit from higher gold prices, as it would reduce the amount of gold they need to give as collateral. In this way we are seeing monetary authorities begin to formally recognize gold and its relationship to debt, which has rather significant implications on where currencies are headed.

Ultimately I don’t think the European Redemption Plan will succeed, if we define success as actually resolving the debt crisis and getting on with the business of creating real prosperity. The only way the debt crisis can be resolved is if the Euro is disbanded AND large portions of public debt are cancelled, thus allowing countries to re-build their economies using the fiscal and monetary policies that are most appropriate for them. Under this plan, which in an effort to amuse myself I’ll refer to as the Patel Plan, owners of public debt from European Union member countries will be the ones left holding the bag and will pay the bill for the insolvency in the Eurozone. As the debt is largely held by banks, I think they are well-positioned to assume this liability -- or at least better positioned than the average taxpayer, who is increasingly underemployed, indebted, and lacking in sufficient savings.

But much to my chagrin it is unlikely that the Patel Plan will pass, or get discussed, or even be mentioned again outside of this article. Rather I think the only thing central banks will do is what they always do: socialize losses through expansion of the money supply. Or, to put it bluntly: print money and debase the currency. This means more QE and LTRO, or whatever they would like to call the process by which money supply is expanded. I suspect that something like the European Redemption Pact will come to fruition, but that when all the dust settles, all it will really do is result in more Euros circulating, and the losses of banks in the Eurozone being socialized across the entire region.

So, what’s this mean for currency speculators? At first glance it would seem a weaker Euro -- that is, at least, until we consider what it will be weaker against. If we look at the US dollar, we see the US is in the same situation, but worse: the US publicdebtisnowat $15.7 trillion, while Europe owes 10.49 trillion euros (13.21 trillion US dollars). Moreover the idea of budget deficits is at least being somewhat taken seriously in the European Union; Greece is going through harsh austerity, as the Netherlands is also seeking to reduce budget deficits. In the United States, though, budget deficits continuetowiden.

The simple conclusion is that the US debt problem is more severe than the one Eurozone, and that the US displays an even greater lack of fiscal restraint. All of this portends more fierce quantitative easing/currency debasement. Bernanke has been a staunch advocate of inflation, and so the central bank has the psychology needed to implement monetary policy accordingly.

Because of these factors, I remain bullish on EURUSD. And so, on that note, let’s take a look at the charts.

As the chart illustrates, I think 1.32 is a good potential target at this point in time for the EURUSD. If we enter at 1.26 and put our stop at 1.22 -- 100 pips below the bullish engulfing pattern highlighted on the chart -- we get a reward/risk ratio of 1.5. We can improve this a bit if we leave capital ready for a pullback, which I think may occur after the market tests near-term resistance at 1.27. Perhaps another pullback to support at 1.2450 can occur at that point.

Simit Patel is a trader with 10+ years experience in the forex industry. He is the founder of InformedTrades, a community dedicated to helping individuals learnforextrading.