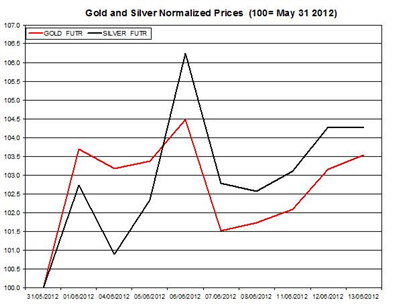 Gold and silver didn't do much yesterday as gold price slightly rose and silver edged down. The mixed trend of major currencies during yesterday's trading may have contributed to the mixed trend in the bullion market. The U.S PPI sharply fell by 1% mainly due to the drop in energy prices. The U.S PPI ex food & energy edged by 0.2%; this news tends to be negatively linked with gold; U.S retail sales edged down by 0.2%. Spain's 10 year bond yields to nearly 6.9% after Moody's rate cut. On today's agenda: U.S. CPI, jobless claims weekly update, Governor King will give a speech, ECB monthly bulletin, Bank of Japan and Swiss National Bank rate decisions.

The chart below presents the normalized rates of these precious metals during the month (normalized to 100 as of May 31st).

U.S. Producer Price Index Fell by 1% in May

According to the latest producer price index report, the U.S PPI for finished goods declined by 1% in May compared with April's index. On the other hand, the Producer Price index excluding food and energy edged up again by 0.2% during May 2012.

U.S Core CPI: According to the U.S Bureau of Labor statistics during April 2012, the core CPI remained unchanged (M-o-M) and the index increased over the last 12 months by 2.3%; the core CPI rose last month by 0.2%;

The Euro/USD rose on Wednesday by 0.42% to 1.2557. Alternatively, other exchange rates such as the AUD and CAD depreciated during Wednesday against the USD. If the U.S dollar will depreciate against these currencies, it may help rally bullion.

Gold traded up for the fourth consecutive day; the recent rally in Euro/USD could have helped pull up the yellow metal. Nonetheless gold price remains in the $1550-$1650 range and silver in $27-$29.

I think bullion rates won't break from this range during the rest of the week. The upcoming auctions might indicate the level of confidence traders have in the EU. The upcoming U.S reports including jobless claims, and core CPI might affect the USD and bullion.