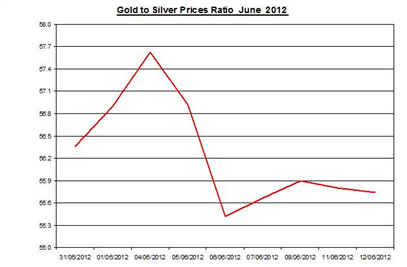 Precious metals prices rose for the second consecutive day. Today there are a couple of bond auctions that will take place including Germany and U.S. Italy will also sell bonds later this week (will seek at least €9.5 billion). If the yields will spike it could raise the concerns around the EU debt crisis. Fitch warns it will downgrade the EU countries if Greece will exit the Union. ECB stated in a report, it will endorse a plan to secure deposits, strengthen supervision on lenders in order to limit the risk for taxpayers. On today's agenda: U.S. Retail Sales and PPI.

The ratio between the two metals edged down again on Tuesday to 55.75. During the month the ratio fell by 1.08% as silver has slightly out-performed gold.

According to the recent U.S federal budget monthly update during May 2012 deficit increased by $124 billion to a deficit of $844 billion for the past eight months (fiscal year of 2012); this means the government debt has risen; on the other hand the current deficit is lower than the deficit recorded during the parallel time in 2011. Back then the deficit reached $928 billion. This increase in deficit might have affected USD during yesterday's trading.

U.S. Retail Sales Report: in the recent report regarding April, the retail sales edged up by 0.1% from the previous month; gasoline stations sales decreased by 0.3% in April compared to March;

U.S. Producer Price Index:In the previous report regarding April this index for finished goods declined by 0.2% compared with March's rate and rose by 1.9% in the past 12 months; this news might affect bullion;

The Euro/USD edged up on Tuesday by 0.18% to 1.2504. Furthermore, other exchange rates such as the AUD and CAD also appreciated during Tuesday against the USD. If the USD will continue to depreciate against these currencies, it may pull up bullion.

Bullion continues to trade up but on a larger scale both metals haven't budge from their respective range in recent weeks. Gold remained in the $1550-$1650 range and silver in the $27-$29 range. I think bullion rates won't break from this range in the days to follow. The upcoming auctions might indicate the level of anxiety in the markets and thus may adversely affect not only the USD but also bullion rates. Today's U.S related reports including PPI and retail sales could affect commodities markets if they will show sharp changes.