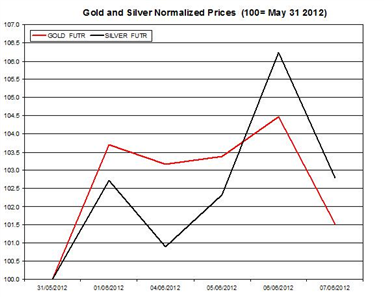 Gold and silver changed direction and plummeted yesterday after the testimony of Bernanke in the Senate didn't bring the kind of news bullion traders had hoped for. Bernanke stated in his testimony that economic conditions are improving; he didn’t refer to any additional steps the Fed might consider, i.e. no hints for additional QE program. This news is likely to further keep bullion rates falling. China also brought some big headlines as Bank of China cut the interest rates by 0.25 percent points to 6.31 for the first time since 2008. Jobless claims decline to 377k. On today's agenda: U.S trade balance report, Canadian Trade Balance, Chinese CPI, Canada's Employment Report and Great Britain PPI Input.

The chart below shows the normalized rates of these metals during the month (normalized to 100 as of May 31st).

American Trade Balance: This monthly report for April will present the changes in imports and exports of goods and services to and from the U.S, including commodities; according to the recent American trade balance report regarding March 2012 the goods and services deficit increased during the month to $51.8 billion.

Canadian Trade Balance: In the previous report regarding March 2012, exports decreased by 0.4%, and imports fell by 0.6%; as a result, the trade balance surplus rose to $351 million; this report may affect the trading of the Canadian dollar which tends to be strongly correlated with price of gold;

The Euro/USD slipped yesterday by 0.17% to 1.256. Furthermore, other exchange rates such as the Aussie dollar and Canadian dollar also slightly depreciated during Thursday against the USD by 0.33% and 0.03%, respectively. If the U.S dollar will appreciate against these currencies, it may push down bullion.

Despite the recent testimony of Bernanke that didn't provide any insight for the next move of the Fed, the speculation is likely to continue. I still think the Fed won't introduce another stimulus plan in the near future. Today's American trade balance report might offer some insight about the developments in the U.S economy. China's rate cut might also affect commodities prices and further drag them down as many consider this move as a sign one the leading economies isn't doing well.