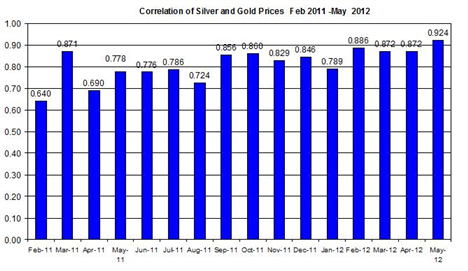 Gold and silver continued their downward trend as the Euro and other currencies also tumbled down. The U.S existing home sales rose in April. European Leaders will convene today in order to talk about the EU debt crisis; they claims they will do all that is possible to keep Greece in the EU. BOJ will announce later in the day on its monetary policy decision. On today's agenda: U.S New Home Sales, China's manufacturing PMI (flash report), the Minutes of the recent MPC Meeting, and Canada's Retails Sales report.

According to the recent U.S existing home sales report for April the number of homes sold rose by 3.4% to a seasonally adjusted annual rate of 4.62 million home sales; this is a positive report that shows some slow paced progress in the U.S housing market.

This news might have been among the factors to drag down metals rates.

U.S. New Home Sales: This report will present the developments in new home sales April 2012; in the previous monthly update (for March 2012), the sales of new homes declined to an annual rate of 328,000 – a 7.1% decrease (month over month); if the number of home sales will continue to decline, it may further indicate a slowdown in the U.S real estate market which may also affect the strength of the USD

Gold and silver declined during most of the month so far and the speculation around the future steps of the Fed seems to have a lingering effect on the metals markets. It seems as if every report on the progress of the U.S economy (the latest coming from the real estate market) is influencing bullion traders on the possibility of another stimulus plan. I still think it's only speculation and there is little evidence to support a Fed intervention in the near future. The upcoming report on the new home sales might continue to play a role in direction of metals prices. On the other hand the recent developments in Europe regarding the EU debt crisis are also having their own effect on the forex and commodities markets. If the EU Summit will bring some headlines that will calm the markets it might pull up the Euro and in turn curb the recent downward trend of bullion.