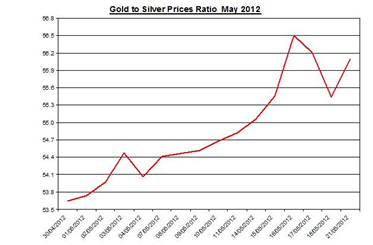 The ratio between the two metals also changed direction and rose on Monday to 56.1. During the month the ratio increased by 4.55% as silver has moderately underperformed gold during the month. In the chart below are the developments of this ratio during May.

U.S. Existing Home Sales: in last month's report for March the number of homes sold declined by 2.3% to a seasonally adjusted annual rate of 4.48 million home sales; if this trend will continue it may curb the recent rally in the USD;

BOJ –Monetary Policy Statement: There are those who speculate the BOJ will expand the stimulus plan even though the recent GDP growth rate during Q1 2012 of Japan was higher than expected by many. If the BOJ will introduce another monetary stimulus plan, this news might affect the Yen and consequently bullion;

The Euro/USD continued to rise on Monday by 0.27% to 1. 2817; furthermore, the AUD and CAD also appreciated on Monday. Since these currencies are still linked with metals, if the USD will change direction and appreciate, bullion may continue with their descent.

Metals resumed their descent despite the deprecation of the US dollar. The rally in the U.S stock markets may have helped pull oil prices up during yesterday's trading but didn't do the same for the metals. Today's U.S related reports mainly the home sales report may affect the USD and consequently bullion market. I speculate there might be some gains in the precious metals during the day, but I still think the general direction for the week will be downward.

Gold and Silver Weekly Outlook for May 21-25