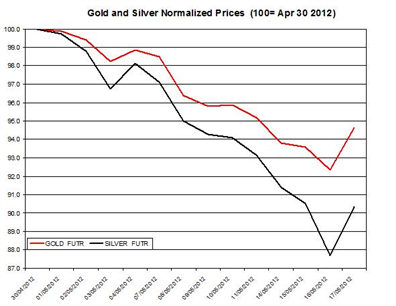 Gold and silver took a sharp turn and sharply rose yesterday. Gold recorded the sharpest single day gain this year (UTD). The Philly Fed Index tumbled down to -5.8 in May; this news may have rallied bullion prices but traded down U.S stock indexes and oil prices. This news along with the recent minutes of the FOMC meeting from April may have rekindled the speculation around QE3.

The chart below presents the normalized prices during month (normalized to 100 as of April 30th).

In the recent May survey, the Philly Fed Manufacturing Indextumbled from +8.5 in April to -5.8 in May 2012. This shift is a negative signal for the developments in the U.S economy. Furthermore, along with the recent minutes of the FOMC meeting, the speculation around another quantitative easing was rekindled again.

Canada's Core CPI: According to the Canadian CPI report for March 2012, the core CPI excluding food and energy increased by 1.9% from March 2011 to March 2012. This report might affect the CAD, which is also strongly correlated with bullion;

G8 Meeting: this meeting will be held over the weekend (Friday and Saturday); if the G8 countries will come up with big headlines from this meeting it may have some effects on the financial markets;

Metals may have changed direction during yesterday's trading, but for now the circumstances have changed much. In my opinion, the Philly Fed index doesn't project well on the progress of the U.S economy, but this isn't a clear cut evidence for a slowdown in the U.S that will translate to the Fed issuing another QE program in the near future. On the one hand if the U.S dollar will continue to appreciate then precious metals prices may resume their downward trend or at least curb their recent uprise. On the other hand this renewed speculation around the QE3 prospects may keep this rally going to close the week on a positive note for bullion.

Gold Price and U.S Money Base – May Report