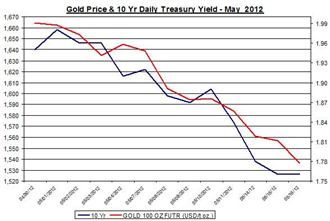 Gold and silver tumbled down again during yesterday along with other commodities prices. The new elections in Greece will be held on June 17. In the meantime the ECB temporarily stopped lending to several Greek banks. Did the minutes of the recent FOMC meeting suggest another QE program on the way? I don't think so, but you will be the judge of that. The U.S housing starts rose by 2.6% in April. On today's agenda: U.S. Jobless Claims Update, Philly and Fed Manufacturing Survey.

Yesterday the minutes of the April FOMC meeting were released; it didn't reveal much. The FOMC members didn't think another stimulus plan is needed for now as the U.S economy is progressing from the GDP and Labor market perspective. On the other hand some investors might consider the following statement as an indication of another QE program on the way:

"Several members indicated that additional monetary policy accommodation could be necessary if the economic recovery lost momentum or the downside risks to the forecast became great enough."

I think it is not sufficient evidence to determine another QE program on the way, at least at this stage. If the U.S labor market will show signs of slowdown it might put back on the table the QE3 path.

U.S. Jobless Claims Update: in the previous report the jobless claims edged down to 367,000; this upcoming weekly update may affect the direction of the U.S dollar and consequently bullion;

Philly Fed Manufacturing Index: In the previous April survey, the growth rate moderately declined from +12.5 in March to +8.5 in April 2012. If this trend will continue this index may adversely affect gold (the recent Philly Fed review);

The U.S. 10-year Treasury yield remained unchanged on Wednesday at 1.76%. This decline in LT securities yields may indicate that the demand for "secure investments" continue to rise. During May there was a mid-strong positive correlation between U.S. long term Treasury yield and gold. The recent rise in demand for U.S. 10-year Treasury might be stem from the high anxiety levels in Europe. The chart below suggests that if the LT U.S. treasury yield will continue to decrease, it might indicate that gold will further decrease.

Bullion rates sharply declined again yesterday and thus both metals completed a four day consecutive fall. But currently bullion prices are rising. This might be stems from further speculation of the FOMC's next step and perhaps even the possibly of another QE program. I think it's too soon to determine whether there will be QE3 in the near future and the current progress of the U.S economy from the GDP and Labor point of view doesn't seem to warrant another stimulus plan. The progress in Japan's economy might also play a role in the rally of commodities prices. Finally the upcoming U.S reports mainly the Philly Fed and Jobless claims may affect bullion.

Gold and Silver Weekly Outlook for May 14-18