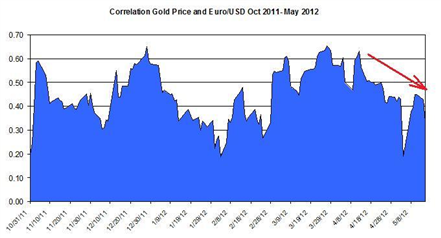 Gold and silver continued their downward trend during yesterday's trading despite the slightly positive news of the higher than expected growth rate of Germany's GDP in the Q1 2012 (a growth rate of 0.5%); the news of the new elections in Greece to be held in June raised the anxiety in the markets and dragged down the Euro. This news may continue to affect the forex and commodities markets in the days to follow. As stated in the weekly gold outlook there are many items on today's agenda: the minutes of April FOMC meeting, U.S housing starts report, ECB President speaks, Euro Area Annual Inflation and BOE Inflation Report .

Minutes of April FOMC Meeting: Following the recent FOMC meeting, in which it was decided to keep the monetary policy unchanged, the market didn't react to this news as metals only slightly rose. The minutes of the FOMC meeting might offer some insight behind this decision regarding the future steps of the FOMC;

U.S. Housing Starts: the housing starts figures were historically correlated with gold– as housing starts declined, gold tended to increase the following day; in the previous report, the adjusted annual rate declined by 5.8% (M-O-M) to 654,000 in March;

The Euro/USD declined again on Tuesday by 0.73% to 1.2729 – the lowest level since January 2012. As indicated below the correlation between gold and Euro/USD slightly fell in recent weeks but is still mid-strong (currently it stands at 0.33). Nevertheless, since these currencies pairs are still strongly and positively correlated with metals, as the USD continues to appreciate against the Euro, bullion may continue to be adversely affected from this trend.

I speculate bullion will continue their downward trend during today's trading. The upcoming reports from the U.S may curb this downward trend if the housing starts will continue to fall and if the FOMC minutes might reveal some more hints of a potential monetary expansion is in the horizon (I suspect low chances for this in the near future). The political developments in the Euro Area mainly Greece may keep the anxiety levels in the financial markets high so that the Euro might continue its weakness against the USD; this Greek news may also drag along with it commodities.

Gold and Silver Weekly Outlook for May 14-18