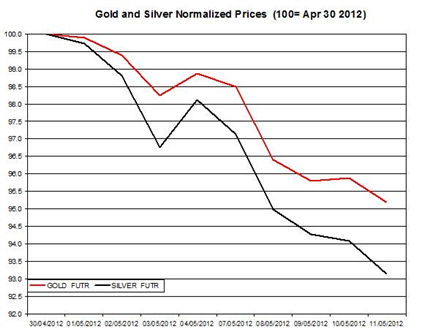 Gold and silver continued their descent on Friday following the publication of the U.S PPI report in which the core producer price index rose by 0.2% during April; the core PPI tends to be negatively correlated with gold price and thus may have also contributed to the downfall of gold on the last trading day of the week. The political shift in Greece is keeping Euro investors anxious of what lies ahead. On today's agenda: Euro Area Industrial Production, SNB Chairman Jordan's Speech, Italian 10 Year Bond Auction and RBA's Monetary Policy Meeting.

The chart below shows the normalized prices of precious metals during month so far (prices are normalized to 100 as of April 30th).

The ratio between two precious metals edged up again to 54.83. During the month the ratio increased by 1.91% as silver has moderately underperformed gold during May. 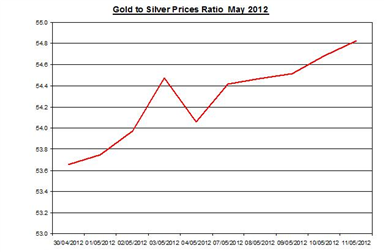 According to the latest producer price index monthly update, which came out on Friday, the PPI for finished goods fell by 0.2% in April compared with March's index.

This report serves as an indicator for the progress of the U.S core CPI to be published next week, May 15th.

During April the food index edged up by 0.2%, while the energy index plummeted by 1.4%.

This means that most of the fall in the U.S PPI is attributed to the drop of the energy prices during last month.

On the other hand, the Producer Price index excluding food and energy increased by 0.2% during April 2012.

16:45 – SNB Chairman Jordan's Speech: the Swiss National Bank Chairman will hold a press conference; if he will announce of a sharp shift in the monetary policy of the SNB it could affect the Swiss Franc;

Tentative – Italian 10 Year Bond Auction: the Italian government will issue a bond auction; the previous bond sales, which were held at the last week of April, went well as the rate reached 5.84%;

12:30 – RBA minutes of Monetary Policy Meeting: The minutes of the monetary policy meeting of the reserve bank of Australia presents the main factors that affected the board's decision to cut the basic interest rate by 0.5 percent points to 3.75%; the minutes of this meeting may affect the AUD and consequently major commodities;

The Euro/US Dollar declined again on Friday by 0.15% to 1.2917; furthermore, the Aussie dollar also depreciated on Friday against the U.S. dollar by 0.62%. Since these currencies pairs are strongly and positively correlated with bullion, if the USD will continue to appreciate against these currencies; this may further drag down bullion.

Gold and silver are still showing weakness and are headed for the worst performing month this year (so far). I speculate bullion will continue their downward trend during today's trading. The U.S PPI report may continue to have some adverse lingering effects on the bullion markets. The situation in Greece doesn’t help the Euro and thus drags along with it commodities prices. Finally, the upcoming report on the Euro Area industrial production might also adversely affect the Euro if it will be negative.

For further reading:Gold and Silver Weekly Outlook for May 14-18