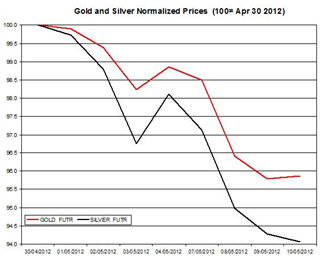 Gold and silver didn't do much yesterday and gold edged down while silver moderately declined. The U.S jobless claims didn't reveal a major shift in the number of claims. The American trade deficit increased. China's industrial output growth didn't match expectations as the retail sales rose in April by only 14.1% compared to a year earlier the least since February 2009. This news is currently adversely affecting the Asian markets and may also adversely affect bullion trading during the day. On today's agenda: U.S PPI, Great Britain PPI and Canada's employment report.

The chart below presents the normalized prices of metals during month so far.

During May the volatility of bullion prices has declined as their standard deviations have decreased and reached their lowest level in 2012. Therefore, the prices of bullion are much less volatility in recent weeks than in earlier stages of 2012. 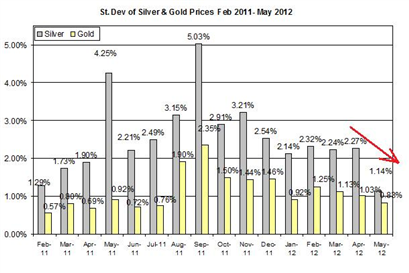 According to the recent weekly update the number of jobless claims slightly fell from the revised figure of 368,000 for the week ending April 28th to 367,000 for the week ending on May 5th. Since there was much of shift in the number of jobless claims this news didn't have much of an effect on the financial markets and only might have slightly adversely affected the USD.

U.S. PPI:In the previous report for March the index for finished goods remained flat compared with February’s rate and increased by 2.8% in the past 12 months; this news might affect today's movement of bullion;

The Euro/USD changed direction on Thursday by 0.05% to 1.2937; furthermore, the CAD and AUD also moderately appreciated; if the USD will change direction and will continue to appreciate against these currencies; this may adversely affect bullion.

Gold changed direction yesterday and edged up while silver continued its descent. I speculate bullion will resume their decline and trade down during today's trading. The upcoming report on the U.S PPI might affect the markets including precious metals markets. The recent news of China's slower than anticipated growth in industrial production might also help pull down commodities.

Finally the ongoing developments in Greece and France might keep the Euro weak and thus adversely affect bullion.

For further reading:Gold and Silver Outlook for May 2012