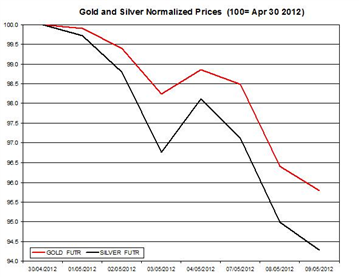 Gold and silver continued their descent during yesterday. As a result of yesterday's fall gold price reached its lowest level since December 2011l. The price of silver is the lowest since January 9th 2012. There still growing concerns that the recent results in the French and Greek elections will adversely affect the austerity plans that were agreed upon in the past to pull out the EU from its debt crisis. The Euro declined in the past eight consecutive days and dragged along with it other exchange rates. There are many events and reports on today's agenda including: Bernanke's speech, U.S jobless claims, Great Britain Bank Rate & Asset Purchase Plan and the trade balance reports of China, U.S and Canada.

U.S. Jobless Claims Report: in the previous report the jobless claims sharply declined to 365,000; this upcoming weekly report may affect the path of the USD and consequently metals;

Bernanke Speech: following the FOMC meeting of April the Chairman of the Federal Reserve will give a speech regarding the US banking that may affect the direction of forex and commodities markets. The title of the speech is “Banks and Bank Lending: The State of Play ";

The Euro/USD decreased again on Wednesday by 0.58% to 1.293; furthermore, the CAD and AUD also depreciated. These currencies are correlated with Bullion (see the chart below); if the USD will continue to trade up this may keep the downward trend of Bullion. 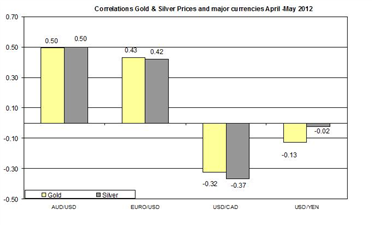 Bullion continued their downward trend during yesterday's trading and thus declined in the past three consecutive days. Will this fall continue? Usually after several days of falling a correction tends to occur; this correction might take place eventually today if there will be negative results in the upcoming U.S reports including the trade balance and jobless claims. Furthermore, Bernanke's speech might also rally the markets especially if he will hint of the Fed's intent to get involved in the markets again. But keep in mind that the recent developments in Europe are likely to keep the Euro weak and the dollar strong, which in turn is likely to keep bullion's downward trend.

Gold and Silver Prices Outlook for May 2012