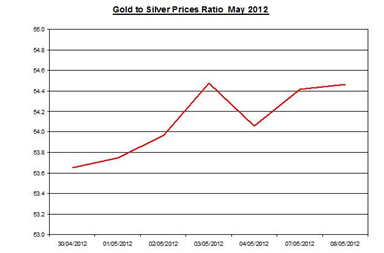 Gold and silver tumbled down during yesterday's trading. This fall didn't come after a fundamental change but rather on account of the recent developments in Europe, in particular the aftermath of the recent elections in France and Greece. This news adversely affected not only precious metals prices but also other commodities prices such as oil prices and U.S and Europe stock markets. The rise of extreme parties in Greece and the difficulty of its leaders in forming the coalition, raise the concerns of Greece keeping up with its austerity plan. Despite these events the Euro is only slowing falling against the USD and didn't tumble down as bullion did during the week so far.

The ratio between gold and silver slightly rose to 54.47. During the month the ratio increased by 1.51% as gold has moderately outperformed silver during May.

As indicated in the chart below the linear correlation between gold and silver was near the 0.9 mark, i.e. strong and positive relation; this means despite the different daily percent changes of gold and silver in recent days, their relation remains strong and robust. 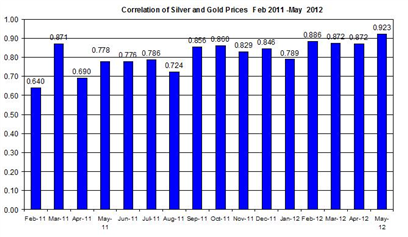 Japan Current Account: this report will show the shifts in the difference between exports and imports for Japan during last month; this news may affect the strength of the Japanese Yen;

The Euro/USD declined again on Tuesday by 0.34% to 1.3006; furthermore, the CAD and AUD also depreciated on Tuesday; if the USD will continue to appreciate against these exchange rates; this may continue to adversely affecting bullion.

Metals tumbled down yesterday and at least for gold yesterday's decline by over 2% was the sharpest single day fall since April 4th when the FOMC minutes of the previous meeting was published. This time the tumble may have been stem from the recent developments in Europe as stated above. In many cases in the past after a sharp fall, there used to be a correction. I speculate the general downward trend is likely to continue.

For further reading:Gold and Silver Weekly Outlook for May 7-11