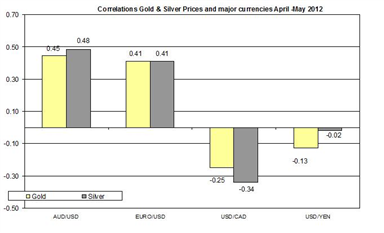 Gold and silver resumed their downward trend on Monday as they have declined in the past five out of sic business days. The results in the French and Greek elections may have had a slight negative effect on the Euro, which in turn may have also adversely affected commodities prices. Despite the decline in gold prices, China's imports of gold from Hong Kong continue to surge in the first quarter of 2012. On today's agenda: Australian trade balance report, ECB President speaks and Australian annual budget release.

According to the recent report regarding March 2012, the seasonally adjusted balance of goods and services expanded to a $1,587 million deficit in March 2012.

The export of non-monetary gold rose again by $75 million (6%); as gold exports continue to expand, this might suggest a rise in demand for non-monetary gold despite the recent decline in gold prices (see here last report);

ECB President Draghi Speaks: Following the ECB rate decision to keep in unchanged at 1% the President of the European Central Bank, Mario Draghi will speak; his speech may include the recent events in Europe and may talk about the ECB's monetary plan if he will refer to implementing LTRO 3 this may affect the Euro/USD, which is strongly linked with bullion;

The Euro/USD slipped again on Monday by 0.24% to 1.3051; on the other hand, the CAD and AUD slightly appreciated. Since these exchange rates are strongly and positively correlated with Bullion (see the chart below); if the USD will appreciate against these exchange rates; this may continue to affect Bullion to decline.

Bullion resumed yesterday their downward tend and until there will be a surprise announcement from the Fed of another QE program or a substantially negative report from the U.S, I suspect gold and silver prices will continue their slow paced downward trend. The speech of ECB President might affect the Euro especially if he will refer to the ECB plans to expand their monetary policy. Finally, the Australian budget might affect the AUD, which is also strongly correlated with bullion.

Gold and Silver Prices Weekly Outlook for May 7-11