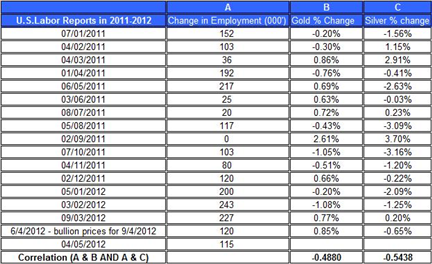 The bullion market has slowed down during the past three months: during February gold declined by 1.67%, during March by 2.3% and during April by 0.42%. Silver hasn't done any better. The recent FOMC meeting didn't affect gold and silver at the end of April. Since the Fed didn't introduce additional monetary steps to jump-start the U.S economy and the situation in the Euro Zone hasn't improved metals position during the month. Will this stalemate in the precious metals market continue in May?

Let's examine the market for April and provide a short outlook for gold and silver for May.

Bullion decreased during most of April, even though for several parts of the month there was an unclear trend for both metals as they have zigzagged from gains to losses.

Let's divide April into two parts: I divide the month on April 12th because that was after the effects of the U.S employment report and U.S jobless claims came into play; during the first part of April, gold edged up by 0.5% and silver by 0.1%. During the second part of April, silver declined by 3.4% and gold by 0.9%.

Here are several factors that may have contributed to the fall of bullion during April:

Here are several factors that may have curbed the fall of bullion during the month:

Outlook for Gold and Silver– May

Here are several factors to consider that may affect the direction of bullion:

In the April report, the U.S employment expanded by 120k jobs. This report has had a negative correlation with gold and silver prices via the USD. Update: U.S labor expanded by 115k during April.

The table above shows the dates of the announcements of the U.S. labor report, the change in employment (column A), and the daily percent change for gold and silver prices on the day the labor report was published (column B and C, respectively). The correlations among precious metals and the changes in U.S. employment are very strong and negative.

These correlations aren't significant, but provide an indicator: the change in the labor force tends to be negatively correlated with gold and silver prices. If the upcoming labor report (to be published on May 4th) will not reach the expectations of at least 150k jobs, this may have a positive effect on bullion.

The upcoming minutes of the April FOMC meeting to be released on May 16th could shake up the precious metals market even though the meeting itself didn’t have much of an effect on the bullion market. If the minutes will reveal a different picture than the one Bernanke painted in the April press conference, this may affect bullion prices.

In conclusion, I speculate bullion will not do a lot better than they did in the last couple of months. The ongoing concerns regarding the stability of the EU may strengthen the USD. Furthermore as long as the U.S economy is growing at a faster rate than the EU, the U.S dollar will probably remain strong against the Euro. On the other hand as long as the market is stagnating with the Euro/USD not moving out of its range, major commodities may also remain flat. Since the FOMC kept the door open on another stimulus plan, the minutes of the meeting might offer some insight that could stir up the markets. Finally if the U.S labor report won't show a big improvement and the U.S economic growth rate might slow down (e.g. slowdown in housing market, manufacturing, Philly Fed etc) then the USD may trade down which may curb the downward trend of bullion.

For further reading: What Are the Potential Outcomes for Gold Price in 2012?