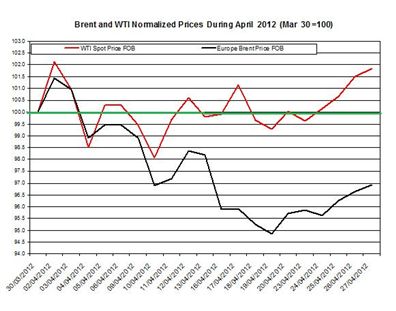 Oil prices showed some signs of recovery as both WTI and Brent slightly increased during last week. They are still in their respective range of $102-$105 for WTI and $117-$120 during the past several weeks; the sharp rise in NG prices during last week might be related with the increase in oil prices. The Brent premium remained in the $15 mark. During the upcoming week there are several important reports and events that may affect the oil market including the U.S manufacturing PMI, no-farm payroll report, ECB rate decision and U.S jobless claims.

The upcoming report will be published on Wednesday, May 2nd and will refer to the week ending on April 27th.

The S&P500 rose during last week by 1.8% to reach 1,403 on Friday; during April there was a strong and positive correlation between oil and S&P500. 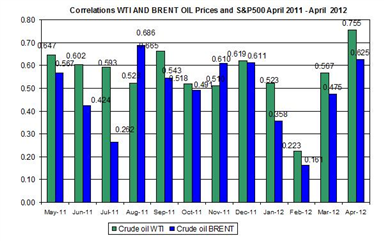 Tuesday 15:00 – U.S. ISM Manufacturing PMI: During March 2012 the index edged up to 53.4%, which means the manufacturing is growing at a slightly faster pace; this index might affect crude oil and markets;

Thursday 13:30 – U.S. Jobless Claims: in the previous update the jobless claims slipped to 388,000; this upcoming weekly report may affect the direction of commodities prices;

Thursday 13:30 – ECB Rate Decision: In previous rate decision the ECB left the rate flat at 1%; if the ECB will decide to change the rate, it may affect the Euro/USD;

Friday 13:30 – U.S. Non-Farm Payroll Report: if the upcoming report will be positive and reach the 180-200 thousand mark, this may positively affect energy commodities (see here my last review on the U.S employment report).

In the upcoming week the U.S Manufacturing PMI and non-farm payroll reports – these reports will show the developments in U.S economy and may affect energy commodities; if these reports will show growth and beat expectations then they could positively affect oil prices; the ECB rate decision may affect oil via the Euro/USD especially if there will be a rate change. If the U.S stock market will trade up this may also positively affect oil. Finally, if major currencies including EURO and AUD will continue to appreciate against the USD, then they may help rally oil prices.