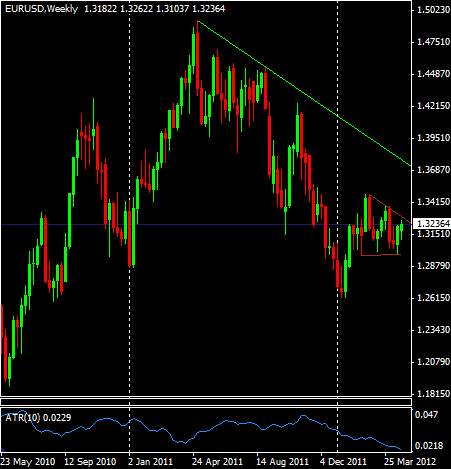 Recent Events: The pair held above major support back on April 16 and has since been climbing toward the upper band of the triangle. A breakout of the triangle which has been in place since mid-February is likely to have a significant impact on traders trading almost all time frames.

The trend has been lower in the EURUSD since 2008, but the rally which peaked about a year ago provides a better trend line. That trendline (green, on the weekly chart below) crosses near 1.38. Therefore, the long-term and medium term trend is down and neither is in danger of reversing at this time.

I have not updated the analysis on this pair in 10 days, simply because the outlook has not changed much. The following is from the April 16 analysis…

The pair continues to consolidate above primary support at 1.2970. This level is also host to the lower breakout point of a (potential) head and shoulders pattern a descending triangle formation. If a drop below 1.2970 occurs the target is 1.2520 (this had been adjusted slightly upward from the actual target) based on both the head and shoulder and triangle.

Of course that only comes into play if we get a significant breakout below 1.2970. Support may hold [it turns out that it did].

Downside movements are mostly inconsequential unless the 1.2970 is pierced. Upside movement is also mostly noise until the pair breaks above 1.3225. Even that means the pair is still within the triangle.

A move beyond 1.3350 signals an upside breakout of the triangle. The target is 1.38 which would put the pair right at the long-term resistance mentioned in the section above.

All the levels from last week remain in play, but we have seen a move above 1.3225. This is not a major level but it does mean the pair was able to break above short-term resistance after holding major support on the April 16 decline.

The upper band of triangle is downward sloping, and therefore the breakout price will decrease over time. A move above 1.3315 (instead of 1.3350) will signal an upside breakout of the triangle. The upside target, if such a breakout occurs, can also be adjusted slightly to 1.3765. If that target were to be reached, the price would be in close proximity to the long-term downtrend line (see weekly chart above). 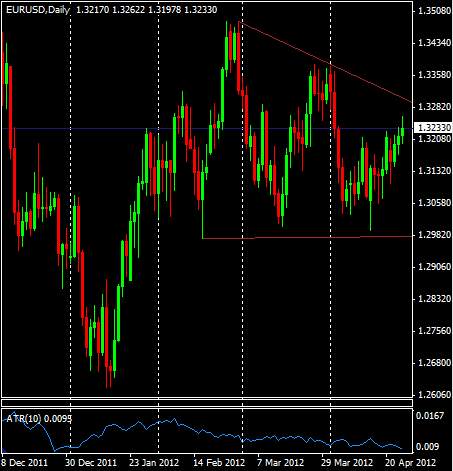 COT Data: There is a still a big speculative short position in the EURUSD. The position eased for a few weeks but speculators (“Large Spec” or green line on chart) are once again beginning to accumulate shorts. If they continue to accumulate it is a short-term negative as the “crowd” wants to sell. If that short position begins to move to an extreme though it is a bullish sign as those shorts will be forced to cover.

This is a secondary factor though. With room to move in either direction, the price levels mentioned above are far more significant factors.

Source: Barchart. Large speculators in green. This the group to watch as extremes are usually hit at market turning points.

Seasonality: The seasonal pattern of the EURUSD dictates that mid-March often sees a bit of a pullback and then continues to rise into April (this happened). Mid-February to mid-April is an overall bullish time for the pair. This is a secondary indicator though. Price action matters much more.

Over the last five weeks Monday’s have been the most volatile day of the week, averaging more than 120 pips of movements. Tuesday through Friday have all averaged slightly less than 100 pips of movement.

Average Weekly Volatility: Based on a 10 week ATR the pair is moving about 229 pips per week. Keep this in mind when considering whether your targets are likely to be hit next week.

Keep this is in mind to avoid overexposure, or find other trades which give the exposure you want but may set-up differently. Correlated pairs also offer hedging capabilities.

Cory Mitchell is a proprietary trader and Chartered Market Technician specializing in short to medium-term technical strategies. He is the founder of vantagepointtrading.com, a website dedicated to trader education and market analysis.