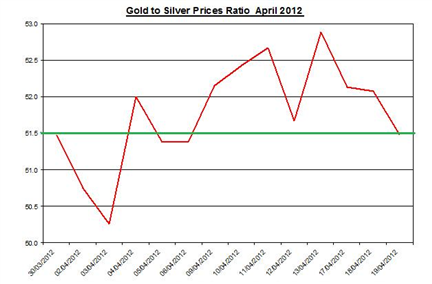 Gold and silver continue to shift from gains to losses with little increments as they did during most of the week; yesterday was no different. The bullion prices edged up. The rest of the markets including energy commodities and U.S stock markets declined. The slow paced growth in the Philly Fed and modest result of the jobless claims weekly update may have influenced traded to take off some of their bets off the table. Nevertheless the market continues to dwindle with little movement as the uncertainty the U.S and Europe remains high. On today's agenda: Canada CPI and German business climate report.

The gold silver ratio declined again to 51.48. During April the ratio remained nearly flat as gold has performed very similar to silver during the month. In the chart below are the shifts in this ratio during April (up to date).

German Business Climate Survey: This survey estimates the monthly changes of the business climate of Germany. If this survey will continue to show progress in the German economy it may positively affect the Euro; the Euro is strongly and positively linked with bullion;

Canada's Core CPI: This report could affect the direction of Canadian dollar, which is also strongly and positively correlated with bullion;

The Euro/USD kept changing direction with an unclear trend as it did in recent weeks. Yesterday it edged up by 0.11% to 1.3138; on the other hand, the "risk currencies" including the AUD and CAD depreciated. If the USD will mostly appreciate against the above mentioned currencies, this may signal bullion may decline.

Bullion kept zigzagging from gains to losses and with little movement along the way. Today may not be much different and could result in another modest shift. If the German survey will be positive and there won't be dramatic negative news from Europe the market could rally and drag along with it bullion.

For further reading:Gold and Silver Outlook for April 2012