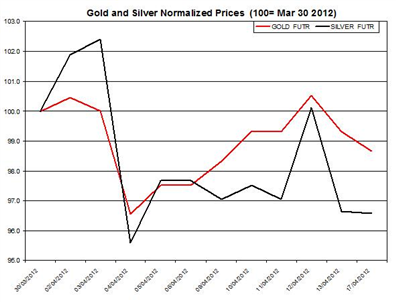 Gold and silver didn't do much yesterday however things might change today seeing that there are many news items on today's agenda including: Great Britain CPI, German and Euro Area ZEW economic sentiment, U.S. Housing Starts and Building permits, Bank of Canada's Overnight Rate and ECB President Draghi Speaks.

It will be interesting how all these items and events will play out today and affect the financial markets (if at all).

The chart below presents the changes in gold and silver during the month (prices are normalized to March 30th).

ECB President Draghi Speaks: Following the April ECB rate decision in which the rate remained unchanged at 1% the President of the European Central Bank will speak and may refer in his speech to the recent events in Spain and may talk about the ECB's plan to calm the markets including implementing LTRO 3 or resuming the SMP. His speech may influence the Euro/USD which is strongly linked with metals;

The Euro/USD bounced back and rose on Monday by 0.49% to 1.3142; on the other hand, yesterday the AUD slightly depreciated against the U.S. dollar by 0.14%. These currencies tend to be positively and linearly correlated with the daily percent developments of bullion. Thus, if Euro and AUD will both trade down, they may signal metals may also drop.

Bullion continued their downward trend from Friday and slipped on Monday; this trend however might change direction if there will be some good news from Europe: the upcoming reports regarding Germany and EU might do the trick; if the ECB President will refer to another rescue program by the ECB this could also be a positive news to rally the Euro and thus metals are likely to benefit as well and rise. On the other hand, if the U.S reports will be positive (housing starts), then the USD may rise and thus gold and silver might continue their descent.