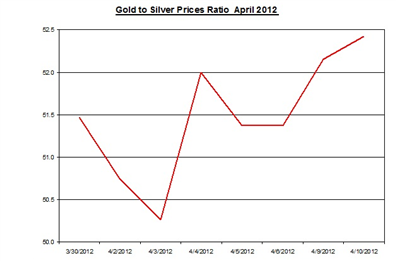 Gold and silver continued their rally while the rest of the markets (including energy commodities and U.S stock markets) are falling. This movement in different directions isn’t likely to last long as energy commodities and stock markets tend to be strongly linked with the precious metals markets. The market mat start to move rapidly again during Thursday and Friday as many U.S financial reports will come out. Today, ECB Monthly Bulletin will come out and Australia Rate of Unemployment.

The ratio between gold and silver edged up to 52.42. During the month the ratio increased by 1.845% as gold has slightly outperformed silver. In the chart below are the shifts in this ratio during April (up to date).

Australia Rate of Unemployment: in the previous report the rate of unemployment edged up to 5.2%; the number of employed fell by 15,400 people; the number of unemployed slightly rose by 16,400 during February compared with January's figures. If this trend ill continue to could affect the AUD which is strongly correlated with bullion (see here the recent report);

Gold and silver continued their general direction of recent weeks of an upward trend following the sharp drop at the beginning of the week due to the FOMC meeting minutes. The risk appetite seems to have subsided a bit as U.S and Europe stock markets sharply declined while the demand for” safe haven” investments picked up again including U.S treasuries and bullion. The recent rally in gold and silver may continue if this sentiment will remain. The upcoming reports to be published may affect forex markets including the Euro and AUD and consequently bullion during today’s trading.

This gold and silver forecast was first published in Trading NRG