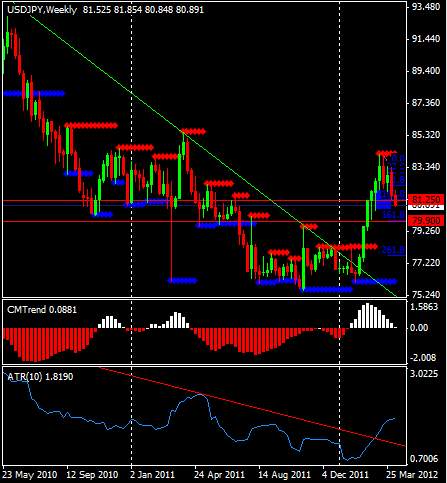 Recent Events: The pair has extended down into a significant support area. In the context of overall uptrend this presents trade opportunities.

The trend remains down for the USDJPY over the long term. We can go back to the high in 2002 to see the massive downtrend the pair has been in. That downtrend is no danger at this point and remains in effect. Moves as high as 1.09 could still be considered corrections in this long-term downtrend.

Going back to 2007 we can see that the pair has broken above a medium-term trendline (green, downward sloping) indicating that we are likely in a large intermediate correction higher.

The bullish bias remains intact unless the pair gets back to 79.90. A move toward this level has become much more likely this week as levels which were expected to hold this market up have not, indicating a movement toward this lower support level. The analysispublished last weekpointed out that 81.25 was a likely low of this correction. This week we are seeing the rate move below 81. This means the correction could extend down into the 80 region.

80 to 79.90 is also a significant area. If this down leg reaches that mark it means the current leg is 1.68 times length the original down leg (March 15 to March 23). This is by no means a rule, but corrective waves often have some relationship to each other and it does provide a context for where support is.

Therefore, this entire area between 81.25 and 79.90 is a support area. The lower end of this support area is also the 50% retracement of the February to mid-March rally.

The short-term trend is down, and the intermediate trend remains up. There is still room for this pair to continue falling based on the breach of 81.25 (significant because it meant the current and original down leg would have been near equal). Buying in the support area presents a potentially low risk buying opportunity for those looking for this longer-term move higher to continue. 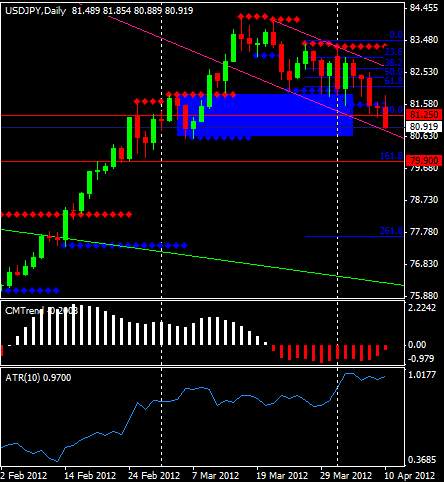 The pair has been in a strong trend since early February. Trend strategies are recommended.

Seasonality: Season patterns are on the side of the long for the time being. Mid-March to early April is generally bullish time for the USDJPY. May is typically a bearish month for the pair.

Daily Average Movement (2-week): 96.6 pips. Keep this in mind if setting daily targets. Volatility has been escalating in 2012 confirming the transition from a low volatility range to a trending environment.

The chart below shows daily volatility by day of the week (5 week average). 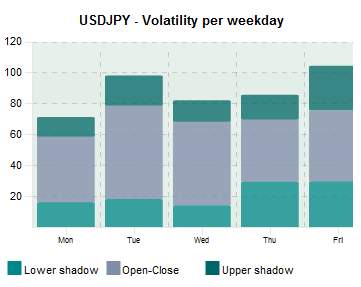 This means that over 24 hours the pair, on average, moves that many pips. When short-term trading, this number is very relevant.

Weekly Average Movement: Based a 10 week ATR the pair is moving 181 pips on average a week. This can be used a guide to determine how long it will take for stops or profit targets to be reached.

Noteworthy Correlations to Other Pairs: EURJPY has a strong positive correlation on a daily and hourly basis. No significant correlations on a weekly basis.

Cory Mitchell is a proprietary trader and Chartered Market Technician specializing in short to medium-term technical strategies. He is the founder ofvantagepointtrading.com, a website dedicated to trader education and market analysis.