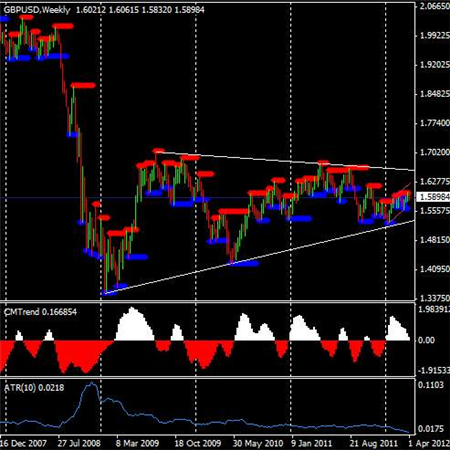 Recent Events: GBPUSD recently witnessed what appears to be a false upside breakout of the range it had been trading in. Despite this, there is still an upward bias at the present time.

Since 2009 the GBP/USD has been trading within a large symmetric triangle. Therefore, price action has been converging between rising and falling trendlines (white lines on the chart). The breakout direction of this triangle will determine the long-term (multi-year) trend going forward. Currently the price sits right in the middle of that triangle. The upper triangle band currently intersects right near 1.66, and the lower triangle band near 1.53.

In early 2012 the pair found support at the longer-term triangle and bounced off that mark. I believe that the triangle support is the dominant factor, and the pair is likely to continue moving toward the upper band of that long-term triangle.

The range the pair has predominately been in since the start of February sits slightly higher than the series of highs seen in late 2011. This is a bullish factor. If the pair continues to hold its range (highlighted in blue on the chart below) and can break higher that will confirm the uptrend and a move toward the upper band of the triangle (this could several months). On the other hand, a drop below the range is bearish and it is likely the long-term triangle support band will be tested again.

Trading recently has been dominated by the range. The range had been between 1.60 and 1.5601, although Friday, Monday and Tuesday saw action above that high, making the recent high 1.6062.

An upside break signals an advance, with a target of 1.63. If the range is looked at in isolation it may appear that Tuesday’s collapse was a false breakout. From a straight “range” play perspective that is true, but from an overall directional standpoint it does not necessarily mean bearishness. On the daily chart I have added a channel which provides a different perspective–one which has upward bias.

As long as that support holds, the upside target of 1.63 remains in play.

Seasonality: Often January and February are a negative months for the GBPUSD but that has not really been the case this year. March is usually a bottoming point and toward the end of March the pair rallies. Since the pair has not adhered to the seasonal pattern so far it difficult to justify giving it much credit, but late March through April is typically a bullish time. 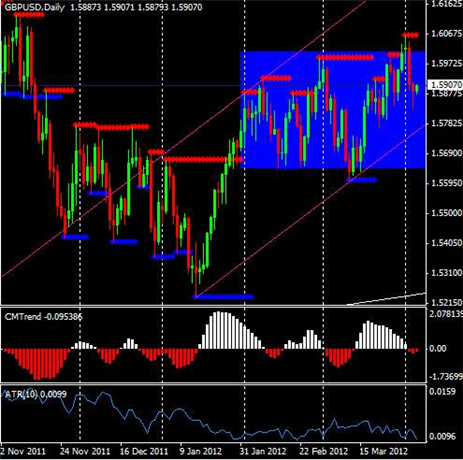 The pair is exhibiting predominately ranging tendencies, within a longer-term chart pattern. The breakout on Friday was not confirmed in anyway by action on Monday or Tuesday.

Daily Average Movement (2-week average): 108.2 pips. Below you can see the average movement on a day of the week basis over the last several weeks. 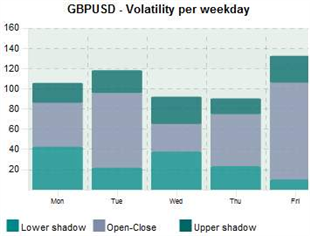 Weekly Average Movement: Based on a 10 Week ATR the average weekly movement of the GBPUSD is 218 pips per week. This can be used an estimate of how long it may take for stops or profit targets to be hit.

Keep this is in mind to avoid overexposure, or to find other trades which give the exposure you want but may set-up differently.

Cory Mitchell is a proprietary trader and Chartered Market Technician specializing in short to medium-term technical strategies. He is the founder ofvantagepointtrading.com, a website dedicated to trader education and market analysis.