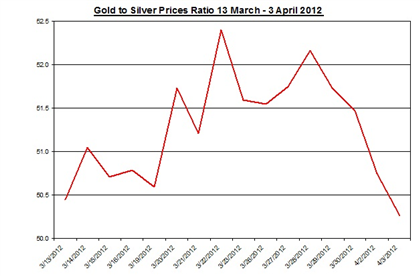 Following the publication of the minutes of the recent FOMC meeting the bullion market reacted to it very promptly as both gold and silver are currently falling precipitately. The minutes reveled that the chances of the Fed executing an additional stimulus plan are low at least in the upcoming FOMC meeting to be held at the end of April. Furthermore, there are certain conditions in which the Fed may alter its pledge to keep rates low until late 2014, depending on the progress of the U.S economy. The two main factors keeping gold and silver rising are the low rates and the chances of another QE program. Therefore the market reaction to the minutes seems to shift the market sentiment again. The U.S continued to show strength as the new orders of manufacturing goods rose by 1.3% during February. There are several news items on today’s agenda including the EU rate decision.

The ratio between gold and silver slipped again to 50.26. During the past few weeks the ratio edged down by 0.37% as silver has moderately outperformed gold. In the chart below are the changes in this ratio between March 13th and April 3rd.

Minutes of the March FOMC meeting – No QE for now

As I have indicated in the weekly outlook for gold and silver, one of the two main news items that could have affected the prices of bullion is the minutes of the FOMC meeting (the second one is the non farm payroll report). The minutes showed that several FOMC members think there is no need for any additional stimulus plan at least until there will be evidence of an economic slowdown. Since the U.S economy has continued to progress in the months following the January FOMC meeting, when the Fed pledged to keep rates low at least until late 2014, it seems less likely that the Fed will add another stimulus plan in the upcoming FOMC meeting in late April.

ECB Press Conference and Euro Rate Decision: It was announced that the ECB will keep the rate unchanged at 1%. President of the European Central Bank, Mario Draghi talked in the press conference about the perils the EU economy faces including economic slowdown and inflation. This speech may have been among the factors pulling down the Euro. In previous rate decision ECB kept the rate unchanged at 1%; the EU GDP in the fourth quarter contracted by 0.3% ;