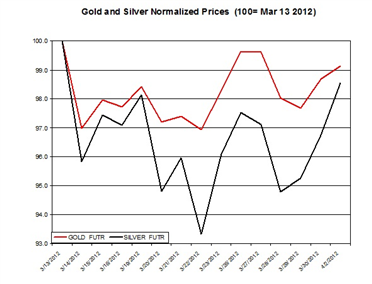 Gold and silver continued their slow paced rise during yesterday and thus completed a two day rally. Will this rally continue throughout the rest of the week is not clear yet. Today the minutes of the FOMC meeting will be released. This might offer some insights as to previous decision and hint on the future steps of the FOMC in the upcoming meeting at the end of the month. The U.S continued to show signs of progress as the U.S PMI manufacturing index increased from 52.7% in February to 53.4% in March. This means the U.S economy is not only expanding but also at a faster pace. This news may have been among the factors driving up not only commodities, but also American stocks during the day. There are several other reports to be published today worth noticing: the RBA cash statement, U.S factory orders, and Australian trade balance.

The chart below presents the changes in gold and silver during the past few weeks (prices are normalized to March 13th).

The EU rate on unemployment edged up from 10.7% in January to 10.8% in February. This news may have pulled down a bit the Euro which is strongly correlated with the changes in bullion prices.

FOMC Meeting Minutes: Following the last FOMC meeting, in which it was decided not to introduce nay additional monetary expansion measures, the market promptly reacted to this news as gold and silver sharply fell. The minutes of the FOMC meeting might offer some insight behind this decision regarding the future steps of the FOMC;

U.S Factory Orders: This report will present the changes in U.S. factory orders of manufactured durable goods during February; this report will offer some insight to the progress of the U.S economy and could affect the direction of the U.S dollar;

Gold and silver kicked off the month on a positive note; their overall performance hadn’t been staggering to say the least during 2012 (up to date). Another QE program could, however turn the tables around and push gold and silver prices up again. But I still think there won’t be another QE program. Today’s U.S factory orders report and FOMC meeting minutes might affect the markets especially there will be unexpected turn of events.