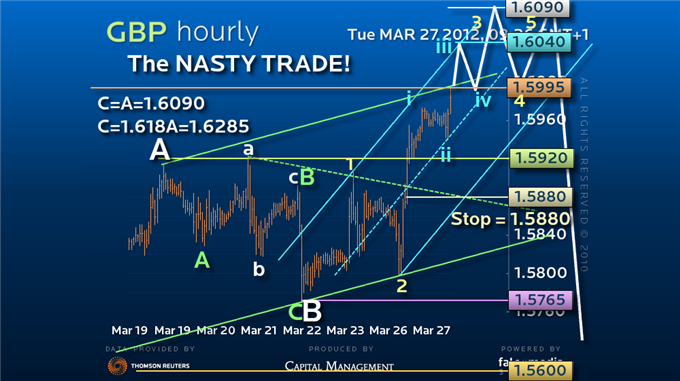 Guest Commentary: - MarketVisionTV - GBPUSD: Looking to Reverse Long when the Market is Wrong

*Sterling remains in an Aggressive Blow out...

*It is repeating price action from April 21st 2011

*We are staying long and raising stops until...

*The Market gets convinced its an uptrend.. then we will Sell!

Cable remains within what we have called the Nasty trade.. a dramatic blowout to an expanding triangular repeating the price action of last April.

It probably doesn't really matter how the correction to 1.5765 or fractal is labelled. For the simple reason that the 1.5920 previous secondary high should now hold for a break of the 1.5995 high and provide the C=A objective of 1.6090 in recently quick order. This should provide a retracement at least to the 1.5995 break point before attempting expand the blowout further to 1.6165 and even the 1.618 multiple target at 1.6285.

We are staying long then with our higher 1.5880 stop looking to reduce when Cable hits the targets and looking to sell for a reversal to 1.56 when we are more certain of two things..

- Firstly how the repeating fractal will play out..once it reverses the more recent smallest fractal it will possibly reverse the lot.

- Secondly for an indication that the market is convinced its a major bull market.. in other words long and wrong. and why its called the Nasty Trade.

Further videos and commentaries are available from ww.marketvisiontv.com and @EdMatts on Twitter.