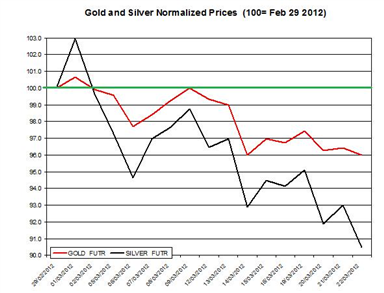 Gold and silver slightly declined yesterday and thus continue their unclear trend as they zigzag from gains to losses on a daily basis. Yesterday they have ended in the trading day in the red. It was reported yesterday that the EU manufacturing index declined to 48.7 (49.3 in February). This news may have been among the factors to drag down the Euro and bullion. Today, U.S. new home sales will be published, and Canada's core consumer price index.

The chart below shows the developments of gold and silver during the month so far (normalized to February 29th).

U.S. New Home Sales: This report will refer to January 2012; in the previous report (January 2012), the sales of new homes declined by 0.9% to 321,000; if the number of home sales will show a decrease in the upcoming report, it may indicate a slowdown in the U.S real estate market which may also affect strength of the USD.

The EURO/USD slightly edged down on Thursday by 0.11% to 1.3201; furthermore, the AUD and CAD also depreciated against the U.S. dollar by 0.68%, and 0.71%, respectively. The AUD, CAD and Euro were historically linearly correlated with the daily percent changes of gold and silver. Thus if the Euro/USD will change direction and rally today it may indicate gold and silver may also increase. 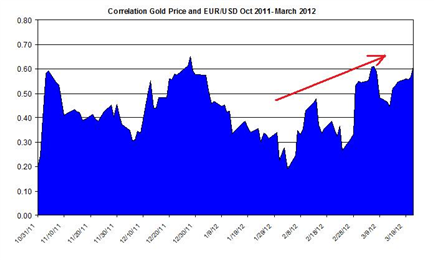 Metals continue to shift from gains for losses with an unclear trend. The news regarding the slowdown of China and EU's manufacturing may have adversely affected not only the Euro, Aussie dollar and Yen but also gold and silver. If the U.S. report will be negative and several currencies will trade up against the USD, then it is likely that gold and silver will follow and increase.