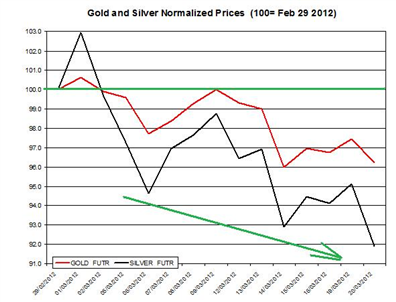 Gold and silver sharply declined yesterday along with the AUD on speculation regarding the economic growth of China and consequently Australia. The US housing market didn't show signs of progress as the U.S housing starts slightly declined during February 2012. Today, Great Britain MPC Meeting Minutes will be published, U.S Existing Home Sales, Japan's Trade balance and China flash Manufacturing PMI.

China flash Manufacturing PMI: in the previous report, the HSBC Manufacturing index edged up to 49.7, but still means the PMI isn't growing; if the index will pass the 50 mark it could mean a positive signal and thus may also positively affect gold and silver; 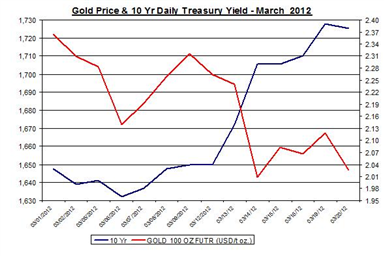 Despite the sharp drop in metals during yesterday's trading, which may have been stem from the speculation regarding China's economic progress and the gold tax in India, the bullion market continues to zigzag with no clear trend in recent days. But on a monthly scale precious metal did take a dive. The drop in gold and silver may continue if the reports from Asia listed above will be negative. The upcoming U.S reports on the housing market may affect the strength USD and consequently may indirectly affect bullion. On the other hand the recent developments in Europe regarding the Greek bailout may rally the Euro and thus may also trade up gold.

This gold and silver outlook was first presents in Trading NRG