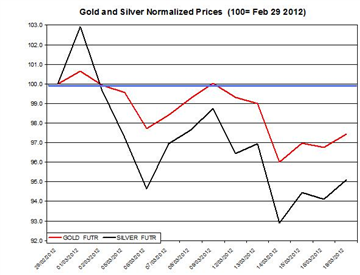 Gold and silver started off the week rising along with many other commodities prices and major currencies including the Euro. But there is still no clear path for gold and silver as both zigzagged from gains to losses on daily basis in the past four business days. Today, Great Britain CPI will be published, U.S housing starts and building permits and Bernanke will give a speech.

The chart below shows the downward trend of gold and silver during March (prices are normalized to February 29th).

During the past four months there has been a drop in the volatility of gold and silver as their standard deviations have declined. Therefore, the prices of bullion are less volatility in the recent months than in earlier stages of 2011. This also means that for the time being the volatility isn't high so it lowers the chances of another CME intervention. 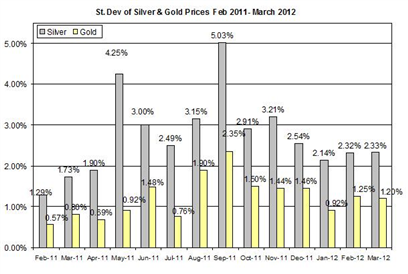 Great Britain CPI: this report will show the yearly rate of GB's consumer price index for February 2012; some expect the February inflation will be slightly lower than in recent months; in the recent report regarding January the annual CPI declined from 4.2% to 3.6%; this news may affect the direction of the British pound;

U.S. Housing Starts: this report was historically correlated with the price of gold– as housing starts rose, gold tended to decline the following day (even when controlling for the USD effect); in the recent report, the adjusted annual rate rose by 1.5% to 699,000 in January; if this upward trend will continue it may adversely affect precious metals prices (the previous US building permits and housing starts review);

The Euro/USD also rose on Monday by 0.47% to 1.3238; further, the AUD and CAD also edged up against the U.S. dollar by 0.16% and 0.46%, respectively. Since these exchange rates are historically linearly correlated with the daily percent changes of gold and silver if these exchange rates will depreciate against the U.S dollar it may indicate gold and silver will also decline.

Precious metals continue to zigzag with no clear trend in the past several business days. This no clear path may continue until the next bombshell. The upcoming U.S reports on the housing market, Bernanke's speech and Great Britain CPI may affect major currencies pairs including British Pound and U.S dollar and consequently may indirectly affect gold and silver. I speculate gold and silver will continue to follow the developments in the forex markets and may trade down.

This gold and silver outlook was first presents in Trading NRG

For further reading:Gold and Silver Prices Weekly Outlook for March 19-23