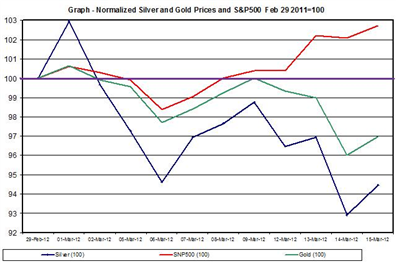 Gold and silver rallied from Wednesday's tumble and ended Thursday in the green. Yesterday's U.S published reports including the decline in U.S. Jobless Claims to 351k, the rise in U.S. PPI by 0.4% in February, and the rise in the Philly Fed Manufacturing Index to +12.5, may have some lingering effect during today's trading. Today the U.S. CPI will be published.

U.S Core Consumer Price Index: This report will show the changes in the core CPI for February 2012. According to the U.S Bureau of Labor statistics in January 2012, the core CPI slightly rose by 0.20% (M-o-M) and also increased over the last 12 months by 2.3%; this news may affect the strengthen of the U.S dollar and consequently bullion prices. The recent U.S PPI that showed a rise of 0.2% (sans energy and food) may indicate the core CPI monthly report will also show a rise in core inflation.

The S&P500 slightly rose on Thursday by 0.6% to 1,402.6. As presented in the chart below, the S&P500 continues to be strongly and positively correlated with gold and silver (during March the linear correlation was 0.571 with gold and 0.662 with silver), even though metals seem to have taken a different direction than the S&P500 has in recent week. Nonetheless, if the stock market will continue to trade up it may indicate that bullion could make a comeback.

Bullion managed to rally on Thursday following the sharp drop they have had a day earlier. This rally may have just been a correction to the sharp fall on Wednesday. The positive news from the U.S as indicated above didn't affect much the markets especially after the positive endorsement of the FOMC earlier this week in the U.S economy. Only unexpected positive news regarding the U.S. economy may eclipse that endorsement. The U.S PPI may continue to have some lingering effects on the USD and consequently metals. Finally, the U.S CPI may also affect the dollar.