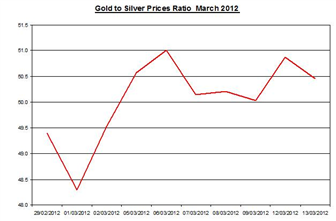 Gold and silver changed directions several times during yesterday's trading but eventually ended the day with slight shifts as gold slightly declined and silver moderately rose. The recent FOMC meeting didn't introduce any new stimulus plans. This news may keep adversely affecting the direction of bullion prices during today's trading. The U.S retail sales report came out yesterday and showed a rise of 1.1% in February 2012. This news may have helped rally the U.S stock markets and major commodities. On today's agenda: Euro Area Annual Inflation and Bernanke's Speech.

The ratio between gold and silver edged down on Wednesday, and reached 50.45. During the month the ratio rose by 2.13% as gold has outperformed silver. In the chart below are the changes of this ratio during the month.

As expected the FOMC decided yesterday to stay on the fence for the time being and didn't commit to another stimulus plan. The FOMC stated in its statement that since there are signs of recovery in the U.S. economy mainly in the U.S. labor market – the recent non-farm employment report is backing up this claim, there won't be any new additional stimulus plans for now. In a previous post I have referred tothepositiverelation between the U.S money vase and the changes in gold price. This news may be responsible to the current drop in bullion prices.

Bernanke Speech: following yesterday's FOMC meeting the Chairman of the Federal Reserve will give a speech might have some influence on the forex and commodities markets. The title of the speech is "Community Banking";

The Euro/USD remained virtually unchanged on Tuesday at 1.3155; further, the AUD and CAD also didn't move much and finished yesterday's trading slightly rising against the U.S. dollar. These currencies pairs are historically linearly linked with the daily movement of gold and silver;

Precious metals continued their slow descent. The recent FOMC statement from yesterday confirmed what many had already anticipated that there won't be in any news QE3 for the time being. This news may continue have lingering effects gold and silver and may keep trading them down. Today's speech of Bernanke may affect bullion traders if he will shake things up and state something unexpected. The EU inflation rate may affect the direction of the Euro/USD and consequently gold and silver.