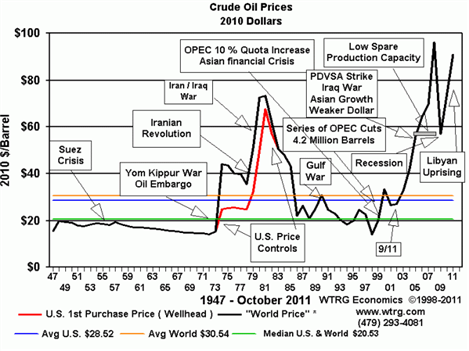 Guest Commentary: Will Oil Prices Go Down an Elevator?

Oil prices are steadily climbing "up the stairs". One of the drivers of this ascent is the tension around Iran. If a full scale conflict really breaks out, there certainly is room for rises.

Nevertheless, history suggests that they will fall down "an elevator" afterwards and will dig deeper into the basement for a long long time.

While US President Obama doesn't really like the idea, reasonable to assume that US will back Israel after an initial strike and that a conflict may erupt.

There are quite a few reasons why this rhetoric can just replace action. An Israeli strike isn't a done deal, not yet.

But what is likely to happen if Israel does strike? Oil prices will certainly rise. Iran is the world's fifth largest producer. Even more importantly, the Straights of Hormuz which Iran threatened to close oversee 40% of the world's oil shipments.

Oil prices have certainly risen due to militant words from both Iran and Israel and already pose some threat to the US economy.

Looking Back at the 90s

And what will happen afterwards? A look at the Gulf War of the early 90s can give us a hint. Oil prices leaped immediately after Iraq invaded Kuwait in August 1990. They continued rising in the buildup to the Gulf War, which began in January 1991.

But afterwards, prices fell sharply, as much as 54% from the peak. They continued declining during the 90s, and fell even deeper than prices seen before the Gulf War.

It was only after OPEC cut quotas, and the atrocities of 9/11 when prices began rising significantly once again.

So, are we about to see deep and long lasting falls in oil prices after the Iranian dust settles down?