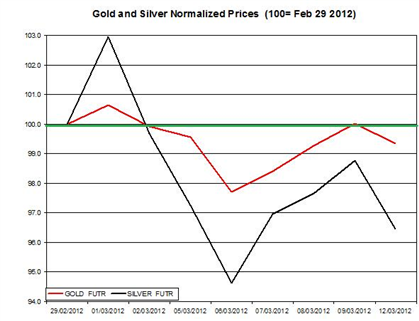 Gold and silver started off the week falling after they have risen in the previous three days. Today the bullion market will probably be affected mostly from the FOMC meeting and whether there will be surprise announcements. Additional items on today's agenda include: U.S. Retail Sales and German ZEW economic sentiment.

The chart below presents the changes in gold and silver during March (prices are normalized to February 29th).

The ratio between gold and silver slightly rose on Monday, and reached 50.87. During the month the ratio rose by 2.98% as gold has outperformed silver. 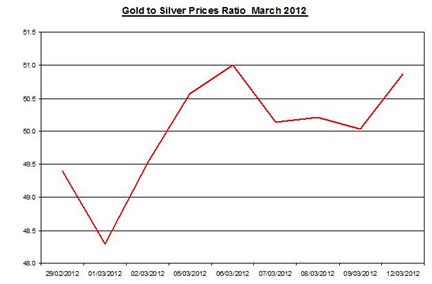 FOMC Meeting: Once the statement of the recent of FOMC will get out, we will be able to know whether the recent rally of gold and silver prices was stem from speculation around the FOMC's decision to implement stimulus plan. Assuming the FOMC won't decide on another stimulus plan, which I suspect will the case especially since the U.S. economy shows some signs of recovery, then we should see a drop in gold and silver;

U.S. Retail Sales Report: this report will show the monthly changes in the retail sales and food services for February; in the previous report regarding January, the retail sales, when controlling for the price changes, rose by 0.4% (for my review of the recent retail sales report); this report is another indicator of the progress of the US economy and could affect the strength of the USD.

Precious metals started off the week declining. The depreciation of major currencies including Aussie dollar and Canadian dollar may have helped drag down bullion. But the main even of the week will be today revolving the FOMC meeting. In the previous FOMC meeting the Fed announced it will keep U.S interest rates low until late 2014. This news immediately pulled up metals. Unless the Fed will surprise with another announcement regarding interest rates or changes in the balance sheet of the Fed without expanding it (operation twist of 2011), I speculate there won't be a QE3 announcement today. In this case, gold and silver may continue yesterday's decline and further drop today.