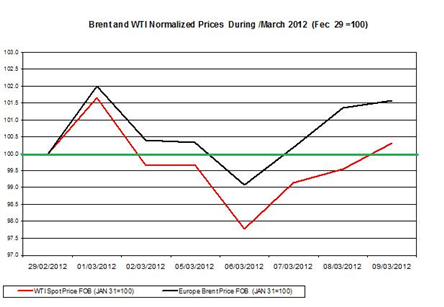 Crude Oil, much like gold and silver, continued to trade high but didn't move much on a weekly scale. During last week Brent added 1.16% to its value and WTI rose by only 0.66%. Will oil prices start to rise? There are many news items and events that may affect the direction of oil during the upcoming week. So here is an outlook for the oil market for the week of March 12th to 16th:

In the chart below are the changes of WTI and Brent during March (prices are normalized to February 29th).

Premium of Brent over WTI

The gap between Brent and WTI slightly rose during last week, but was still in the range of $17-$19 per barrel. During March the premium increased by 9.57%. 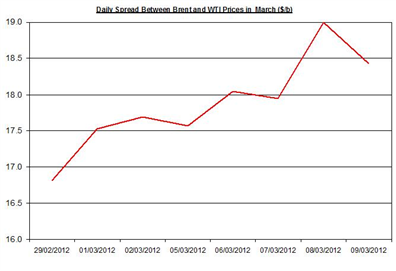 The standard deviations of oil sharply fell during March to their lowest level since January 2012. This might indicate that both crude oil prices' volatility has sharply decreased during recent weeks. 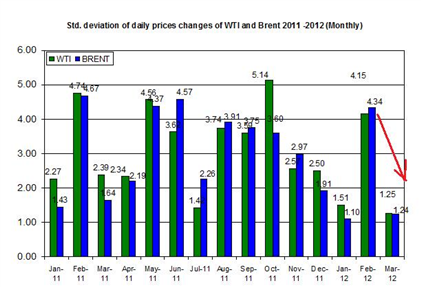 This monthly report showed the main developments in crude oil and natural gas's supply and demand worldwide; according to the recent report which was published on Friday, March 9th, OPEC's oil production reached 30,968 thousand bbl/d in February (Here is a summary of the OPEC report);

The upcoming report will come out on Wednesday, March 14th and will refer to the week ending on March 9th.

This upcoming report will present an updated (as of February) outlook and analysis for the global crude oil market for 2012 and 2013 (a summary of the previous report);

The report will be published on Wednesday, March 14th.

Tuesday– FOMC Meeting: I think the FOMC won't announce of QE3, especially since the U.S. economy shows signs of recovery; the FOMC meeting may affect the strength of US dollar and consequently oil;

Thursday– U.S. PPI: This report will present the progress in the PPI during February 2012, i.e. the inflation rate from producers' stand point. In the previous report regarding January this index for finished goods edged up by 0.1% compared with December's rate and rose by 4.1% in the past 12 months; this news might affect the direction of oil;

Thursday– Philly Fed Survey: In the last survey, the index grew from +7.3 in January 2012 to +10.2 in February. This index may the direction of crude oil prices (the recent Philly Fed review);

The premium of Brent over WTI slightly rose in recent week but didn't reach new highs we didn't see in 2011. The U.S economy continues to show signs of recovery and thus may keep the WTI oil price high. From the supply side, the tensions between Iran and Europe may also help keep the oil prices high.

In the upcoming week there are several financial reports and events that may affect oil including the U.S retail sales, FOMC meeting, Bernanke's speech, IEA monthly report, U.S. PPI and Philly Fed manufacturing index. If the FOMC won't announce of QE3 and these U.S related reports will mostly show signs of recovery in the U.S economy they may pressure up oil.