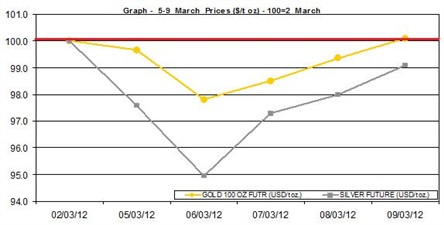 Here is a short overview of the recent changes in gold and silver during the week of March 5th to 9th; this includes a short description of the main news items, decisions and events that may have affected precious metals; in this analysis I use charts and a fundamental analysis to examine how if any last week's events and financial reports affected the direction of gold and silver.

One of the main news items that stirred up not only the metals markets but also other financial markets was related to the developments in the Greek debt crisis. During last week it was reported that investors had agreed to swap nearly 85% of the Greek debt. The Greek debt restructuring with private investors put Greece officially in default. In this "restructuring" Greece managed to cut €105 billion of its privately held debt. This debt cut is also putting Greece one step forward in receiving a €130 billion of international bailout.

Gold slightly rose during last week by 0.10%; Silver price, much like gold, didn't change much on a weekly scale and slightly decreased by 0.91.

In the following graph are the shifts in silver and gold, which were normalized to 100 to the end of last week – March 2nd. Gold and silver fell during the first half of the week and rallied during the second part.

The video link on gold and silver prices provides a broad forecast for the major news and events that might affect the path of gold and silver during the week of March 12th to March 16th; the video includes reviewing the main reports, events, decisions and news items to be published during the upcoming week. Some of these reports and events include:

FOMC Meeting: The FOMC will convene for the second time this year and will decide on the its interest rate and present an economic outlook for the U.S. economy; I think there is little evidence the FOMC will decide on another stimulus plan, especially since the U.S. economy shows signs of recovery (e.g. improving labor market and expanding GDP); the FOMC meeting and the statement that will follow may affect the strength of US dollar and consequently gold and silver; if the recent rally of gold and silver during last week was stem, in part , due to speculation of another quantitative easing plan, this meeting could pull down metals (assuming there won't be such an announcement);

Bernanke Speech: following the FOMC meeting on Tuesday the Chairman of the Federal Reserve will give a speech might have some influence on the forex and commodities markets. The title of the speech is "Community Banking".