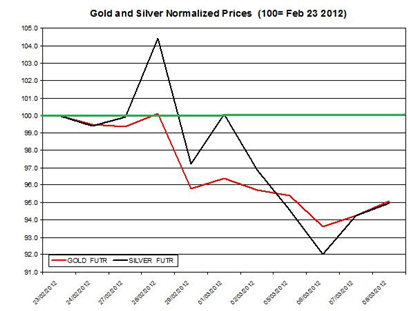 Gold and silver continued their recovery and rose again yesterday. The concerns revolving the Greek debt crisis have subsided for now after investors agreed to swap nearly 85% of the Greek debt. Yesterday, ECB announced it will leave its rate unchanged at 1% and also published its financial reports for 2011. According to the report, ECB's net profit rose to €728 million (in 2010 it was €171 million). Finally, U.S. jobless claims rose to 362,000. These events may have been among the factors to pull up the Euro and dragging along with it gold and silver during yesterday's trading. Today there are several reports to published including: U.S. Non-farm Employment, American and Canadian Trade Balance, and Canada Employment Report.

The chart below shows the developments of gold and silver during the last few weeks (prices are normalized to February 23rd).

In the previous report regarding January 2012, the U.S. labor market continued to improve as the number of non-farm payroll employment expanded by 243k; the U.S unemployment rate declined to 8.5%;

The table below shows the correlation between the news of the U.S. labor report and the daily changes in gold and silver on the day of publication. 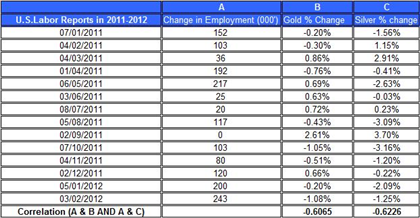 According to the ADP report, the U.S. labor rose by 216k during February 2012. If this figure will be close to the actual number to the U.S. labor report it could rally the U.S. dollar, which in turn may trade down gold and silver.

Yesterday, gold and silver rallied for the second consecutive day as many other financial markets also traded up including crude oil, American stock and "risk currencies" such as Euro and Aussie dollar. Gold traders are very bullish in recent days and thus the recent upward trend of gold might continue in the days to come. But today this rally might be interrupted.

The upcoming American reports mainly the U.S. labor report may change this recent upward trend: if the U.S. employment expanded again in February it could adversely affect gold and silver. Or at the very least curb their recent rally.

How Will a Greek Default Affect The Price of Gold?